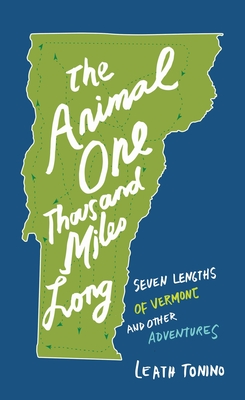 The Animal One Thousand Miles Long

Seven Lengths of Vermont and Other Adventures

The phrase "an animal a thousand miles miles long," attributed to Aristotle, refers to a sprawling body that cannot be seen in its entirety from a single angle, a thing too vast and complicated to be knowable as a whole. For Leath Tonino, the animal a thousand miles long is the landscape of his native Vermont. Tonino grew up along the shores of Lake Champlain, situated between Vermont's Green Mountains and New York's Adirondacks. His career as a nature and travel writer has taken him across the country, but he always turns his eye back on his home state. "All along," he writes, "I've been exploring various parts of the animal, trying to make a prose map of its body--not to understand it in a conclusive or definitive way but rather to celebrate it, to hint at its possibilities." This fragmented yet deep search is the overarching theme of the twenty essays in The Animal One Thousand Miles Long. Tonino posits that geography, natural history, human experience, and local traditions, seasons, and especially atypical outings--on skis, bicycles, sleds, and boogie boards--can open us to a place and, simultaneously, open a place to us. He looks closely at what he calls "huge-small" Vermont, but his underlying mission is to demonstrate our collective need to better understand the meaning of place, especially the ones we call home and think we know best. From Laredo to Jackson Hole, San Francisco to Burlington, his sensibility is applicable to us all. In his signature piece, "Seven Lengths of Vermont," he traverses the length of the state in seven different ways--a twenty-day hike, 500 miles on bicycle, a thirty-six-ride hitchhiking tour, 260 miles in a canoe, ten days swimming Lake Champlain, a three-week ski trek, and a two-hour "vast and fast" flyover. He plots each route with blue ink on maps strung across his office. "Each inky thread was an animal a thousand miles long," he writes. "Vermont appeared before me as a menagerie." What Bill Bryson's A Walk in the Woods did for the Appalachian Trail and Peter Mayle's A Year in Provence did for the South of France, Tonino's affinity for the land he calls home gives a new perspective on the Green Mountain State. His infectious love of the outdoors, the ground of everyday life, should inspire us to explore the places just outside our own front door.

Leath Toninio, a writer from Vermont, has also worked as a wildlife biologist in Arizona, a blueberry farmer in New Jersey, and a snow shoveler in Antarctica. His essays, reported stories, and interviews appear in magazines such as Outside, Men's Journal, Orion, Tricycle, Utne Reader, and The Sun. When not at his desk, he roams North America's libraries and wildlands.
Loading...
or support indie stores by buying on