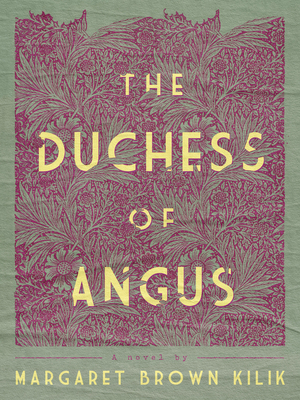 The Duchess of Angus

Written in the 1950s and discovered by family members years after her death, Margaret Brown Kilik's shocking coming-of-age novel of the emotional and sexual brutality of young women's lives in wartime San Antonio deserves a place on the shelf alongside classic novels like Sylvia Plath's The Bell Jar and Carson McCullers's The Member of the Wedding. The Duchess of Angus reworks Kilik's unusual personal history (her mother spent the 1930's running flophouse hotels all over the United States, leaving Margaret to be brought up by a host of relatives) into a riveting portrait of a young woman navigating a conflicted and rapidly changing world, one in which sex promises both freedom from convention and violent subjection to men's will. Strikingly modern in its depiction of protagonist Jane Davis and her gorgeous, unreadable friend Wade Howell, The Duchess of Angus covers some of the same emotional territory as novels like Emma Cline's The Girls and Robyn Wasserman's Girls on Fire. Includes an introduction by Jenny Davidson and contextual essays by Laura Hern ndez-Ehrisma and Char Miller.

Margaret Brown Kilik was raised by a single mother, and they moved frequently throughout the country during her childhood. Kilik graduated from the University of Toledo with a degree in English and subsequently lived in San Antonio, where she renewed a relationship with Eugene Kilik, whom she married. They spent the majority of their lives in New York City, where Kilik established and ran the Key Gallery in Soho. She was a collage artist and writer, and her only novel, The Duchess of Angus, written in the early 1950s, was discovered after her death. She died in New York in 2001.
Loading...
or support indie stores by buying on