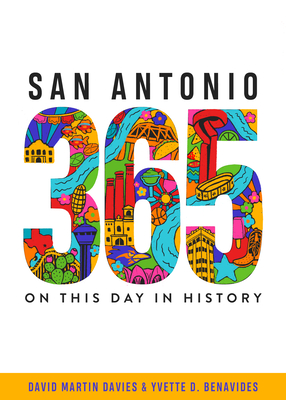 On This Day in History

San Antonio 365: On This Day in History tells one story a day in the history of the Alamo City, from popular lore to lesser known events critical to understanding its people and culture. The result is a treasure trove of remarkable tales highlighting small ripples that created big waves in the region's history. The stories in San Antonio 365 are fun and enlightening slices of history, but they also highlight our collective need to learn from the past. Internationally known as a center of business and tourism, San Antonio has also been the site of significant episodes in the fight for equal rights and justice, the importance of economic and cultural diversity, and the evolution of good government. Among the 365 stories are the anti-Communist riot at Municipal Auditorium led against Emma Tenayuca, the segregation of cinemas and swimming pools, and the 1955 integration of San Antonio schools. Charming anecdotes and quotes bring each story to life. For instance, did you know that Butch Cassidy and the Sundance Kid cooled their heels on the streets of San Antonio a few miles from what would became Interstate 10--where the rock group R.E.M. filmed their iconic video "Everybody Hurts"? A lively essay introducing each month underscores the important ways that history is never just about the past. As Kurt Vonnegut said, "History is merely a list of surprises. It can only prepare us to be surprised yet again." San Antonio 365 brings to life more than three hundred years of surprises, highlighting both historical moments that have been overlooked and those told again and again--and the compelling characters who shaped the city.

Yvette D. Benavides is a professor of creative writing at Our Lady of the Lake University and a commentator on Texas Public Radio. She contributes book reviews to the San Antonio Express-News, and she is the editor of Trinity University Press's series EQ: Creative Nonfiction on Social Equity.
Loading...
or support indie stores by buying on