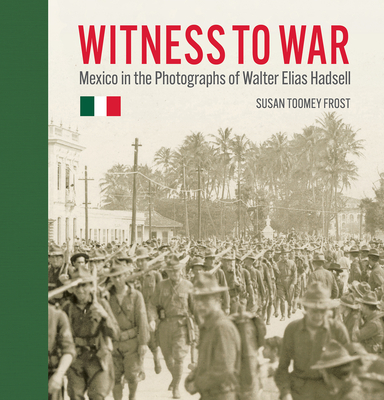 Mexico in the Photographs of Walter Elias Hadsell

Witness to War presents a compelling visual record of a young American man's venture in Mexico as the country veered into revolution in the early 1900s. Walter Elias Hadsell, a skilled photographer who had recently graduated as a mining engineer, documented a critical period of foreign investment in Mexico's mining industry and, in the process, captured scenes of Mexican life in other cities.

Susan Toomey Frost draws from an extensive collection of Hadsell's original photographic prints to narrate his ten years in Mexico. The images in Witness to War follow him from his time as a mining engineer in Honduras to his 1917 return to mining in Arizona, his home state.

Planning for a future career in photography, Hadsell soon acquired the Kodak franchise for Veracruz, Mexico's most important port since colonial times. He documented the damage done in Mexico City during a ten-day uprising in 1913 that led to the assassination of Mexican president Francisco Madero.

Veracruz became a vortex for U.S. interference in the Mexican Revolution when President Woodrow Wilson invaded the country in 1914 in an attempt to thwart Mexico's successor president and to favor opposing forces. Hadsell, as a resident American citizen, had immediate access to the military operation as it unfolded. His images are essential historical records of Wilson's intervention in Mexican affairs.

Hadsell's camera recorded images of a defenseless city disrupted by the landing of thousands of American troops. With no exit plan, U.S. forces remained for seven months before abruptly departing. Hadsell's personal life took a tragic turn with the death of his wife, who left him with three young children, all born in Mexico. He endured another tragedy with the loss of his Veracruz studio during a period of anti-Americanism, though he ultimately left a rich legacy documenting U.S.-Mexico relations at a critical time.

Walter Elias Hadsell (1880-1967) graduated from the University of Arizona Mining School at age twenty-five and took mining jobs in Arizona and Mexico. Relying on photography experience he gained in college at the Buehman Studio, he honed his skills while living in Mexico. He owned a Kodak franchise in Veracruz, Mexico, and became widely known as a photographer.
Loading...
or support indie stores by buying on