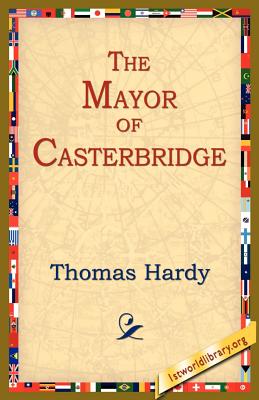 The Mayor of Casterbridge

Purchase one of 1st World Library's Classic Books and help support our free internet library of downloadable eBooks. Visit us online at www.1stWorldLibrary.ORG - - One evening of late summer, before the nineteenth century had reached one-third of its span, a young man and woman, the latter carrying a child, were appro- aching the large village of Weydon-Priors, in Upper Wessex, on foot. They were plainly but not ill clad, though the thick hoar of dust which had accumulated on their shoes and garments from an obviously long journey lent a disadvantageous shabbiness to their appearance just now. The man was of fine figure, swarthy, and stern in aspect; and he showed in profile a facial angle so slightly inclined as to be almost perpendicular. He wore a short jacket of brown corduroy, newer than the remainder of his suit, which was a fustian waistcoat with white horn buttons, breeches of the same, tanned leggings, and a straw hat overlaid with black glazed canvas. At his back he carried by a looped strap a rush basket, from which protruded at one end the crutch of a hay-knife, a wimble for hay-bonds being also visible in the aperture. His measured, springless walk was the walk of the skilled countryman as distinct from the desultory shamble of the general labourer; while in the turn and plant of each foot there was, further, a dogged and cynical indifference personal to himself, showing its presence even in the regularly interchanging fustian folds, now in the left leg, now in the right, as he paced along.