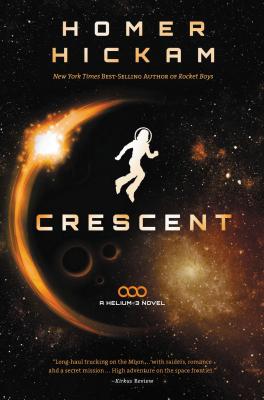 She was born to kill, born to die.

Crescent is a crowhopper--a genetically modified mercenary programmed for ruthless warfare. When she's taken prisoner by Crater Trueblood instead of being killed in battle, she thinks it's a disaster.

Crater is weary of war. He's a miner, not a soldier. He'd rather be mining Helium-3 than battling the infernal crowhoppers. But after he captures Crescent and brings her to Moontown, he's surprised how much he enjoys her company. When she's falsely accused of murder, he becomes an outlaw to help her escape.

The unlikely pair escapes into the "big suck" and wind up trekking with a caravan of mining pioneers toward a lunar ghost town called Endless Dust. To survive, they must do more than navigate the beautiful, desolate moonscape and battle a persistent band of crowhoppers sent to capture or kill them. They must decide what--and who--is truly worth fighting for.

Homer Hickam is the author of the #1 New York Times bestseller Rocket Boys, which was made into the acclaimed movie October Sky. He is also the author of the best-seller Torpedo Junction, The Keeper's Son, The Ambassador's Son, the award-winning memoir Sky of Stone, and the bestseller Back to the Moon. He is married to Linda Terry Hickam. Visit homerhickam.com for more information.
Loading...
or support indie stores by buying on