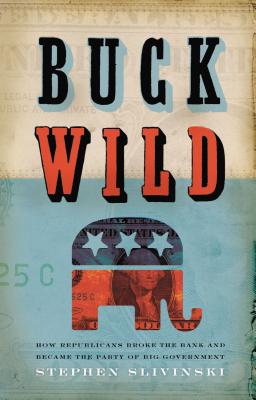 "If you fell into a coma in November of 1994 and woke up yesterday, a lot of things might surprise you. But nothing would baffle you more than what has happened to the Republican Party. Stephen Slivinski can explain. Buck Wild tells a painful story, but it's honest and true and well worth reading."

-TUCKER CARLSON, host of MSNBC's The Situation with Tucker Carlson and author of Politicians, Partisans and Parasites

"Buck Wild does more than reveal what's wrong with the Republicans. It reveals what's wrong with us, the voters who put them in office. Politicians are foxes. But we insist on believing that some are guard dogs. We elect them to watch the hen house, and on the first Wednesday in November there's nothing left but feathers."

"During the course of Stephen Slivinski's superbly researched chronicle, we meet some true conservative heroes from whom we can draw inspiration for the future. Their constant courage, punctuated by occasional success, tells us that the fight against the Leviathan state might yet be won."

A scathing look at how the Republican Party, once the paragon of fiscal conservativism, has embraced Big Government and become even more irresponsible with taxpayer money than the Democrats.