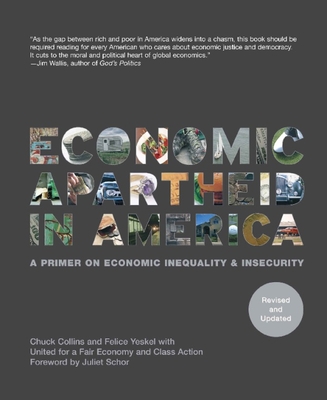 A Primer on Economic Inequality & Insecurity

This updated edition of the widely touted Economic Apartheid in America looks at the causes and manifestations of wealth disparities in the United States, including tax policy in light of the 2001 and 2003 tax cuts and recent corporate scandals.

Published with two leading organizations dedicated to addressing economic inequality, the book looks at recent changes in income and wealth distribution and examines the economic policies and shifts in power that have fueled the growing divide.

Praised by Sojurners as "a clear blueprint on how to combat growing inequality," Economic Apartheid in America provides "much-needed groundwork for more democratic discussion and participation in economic life" (Tikkun). With "a wealth of eye-opening data" (The Beacon) focusing on the decline of organized labor and civic institutions, the battle over global trade, and the growing inequality of income and wages, it argues that most Americans are shut out of the discussion of the rules governing their economic lives. Accessible and engaging and illustrated throughout with charts, graphs, and political cartoons, the book lays out a comprehensive plan for action.

United for a Fair Economy (UFE) challenges the concentration of wealth and power that corrupts democracy, deepens the racial divide and tears communities apart. UFE uses popular economics education, trainings, and creative communications to support social movements working for a resilient, sustainable and equitable economy. "Economic Apartheid in America: A Primer on Economic Inequality and Insecurity" (The New Press) looks at recent changes in income and wealth distribution, examining the economic policies and shifts in power that have fueled the growing divide and laying out a comprehensive plan for action.

Chuck Collins is senior program developer at United for a Fair Economy, a senior fellow at Class Action, and the author of several books. He is a co-founder of UFE and Responsible Wealth. He lives in Massachusetts.

Felice Yeskel is the co-director of Class Action and a faculty member in the Social Justice Education Program at the University of Massachusetts, Amherst. She is a co-founder of UFE and Responsible Wealth. She lives Massachusetts.
Loading...
or support indie stores by buying on