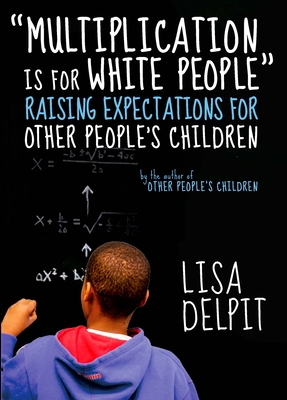 Multiplication Is for White People (Hardcover)

Raising Expectations for Other Peoplea's Children

As MacArthur award-winning educator Lisa Delpit reminds us--and as all research shows--there is no achievement gap at birth. In her long-awaited second book, Delpit presents a striking picture of the elements of contemporary public education that conspire against the prospects for poor children of color, creating a persistent gap in achievement during the school years that has eluded several decades of reform. Delpit's bestselling and paradigm-shifting first book, Other People's Children, focused on cultural slippage in the classroom between white teachers and students of color. Now, in "Multiplication is for White People", Delpit reflects on two decades of reform efforts--including No Child Left Behind, standardized testing, the creation of alternative teacher certification paths, and the charter school movement--that have still left a generation of poor children of color feeling that higher educational achievement isn't for them. In chapters covering primary, middle, and high school, as well as college, Delpit concludes that it's not that difficult to explain the persistence of the achievement gap. In her wonderful trademark style, punctuated with telling classroom anecdotes and informed by time spent at dozens of schools across the country, Delpit outlines an inspiring and uplifting blueprint for raising expectations for other people's children, based on the simple premise that multiplication--and every aspect of advanced education--is for everyone.

MacArthur "genius" award winner Lisa Delpit's article on "Other People's Children" for Harvard Magazine was the single most requested reprint in the magazine's history following its publication. Delpit expanded her ideas into a groundbreaking book with the same name, which won a Critics' Choice Award from the American Educational Studies Association, Choice magazine's Outstanding Academic Title award, and was voted one of Teacher Magazine's "great books." A recipient of the Harvard School of Education's award for an Outstanding Contribution to Education, she is dedicated to providing excellent education to communities both in the United States and abroad. She is a co-editor of The Real Ebonics Debate, Quality Education as a Constitutional Right, and The Skin That We Speak(The New Press). Currently the Felton G. Clark Professor of Education at Southern University, she lives in Baton Rouge, Louisiana.

Praise For Multiplication Is for White People: Raising Expectations for Other Peoplea's Children…

If all teachers adopted these ideas, the American educational system would be vastly improved for all students. Covering age groups from preschool to college, Delpit offers advice to new and veteran teachers, advice that applies not only to African American students but to all ethnic and minority groups. A much-needed review of the American educational system and an examination of the techniques needed to improve the teaching methods of all involved in that system.”
—Kirkus Reviews

In this passionate book, Lisa Delpit argues thoughtfully and urgently for a new approach to the education of the children who are now left behind. We must heed her words of wisdom.”
Diane Ravitch, author of The Death and Life of the Great American School System

Once again Lisa Delpit dispels myths about the way in which African American children learn. She demonstrates how they can master complex concepts and succeed if racist systems get out of their way.”
Herbert Kohl, 2010 Guggenheim Education Fellow, National Book Award winner, and author of 36 Children

This book is an instant classic. By challenging us to reimagine the culture, politics, and practice of teaching our nation’s most vulnerable and marginalized students, Lisa Delpit raises the stakes of the current conversations on education yet again. Her scholarship is rigorous, her scope is wide-ranging, her writing is magical, and her hope is contagious.”
Marc Lamont Hill, author of Beats, Rhymes, and Classroom Life: Hip-Hop Pedagogy and the Politics of Identity

'Multiplication Is for White People' compels readers to think deeply about why we allow assessment to drive instruction, why we have silenced discussion about inequality in public policy, and why outcomes continue to be so stubbornly correlated with race. At a time when profound thinking about solving America's education dilemmas is in short supply, Delpit has come to the rescue with a book that forces us to do just that.”
Pedro Noguera, Peter L. Agnew Professor of Education at New York University and author of The Trouble With Black Boys