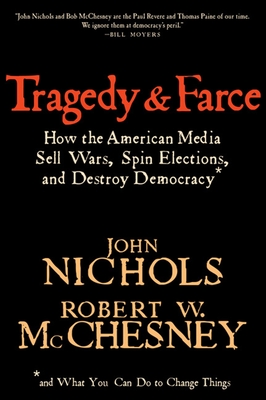 Thomas Frank called Tragedy and Farce "an appeal to reason in a dark time." Including the sharpest analysis of 2004 election coverage yet and the first detailed look at the burgeoning media reform movement, this book is both an expose and a call to action. In it John Nichols and Robert McChesney--two of the country's leading media analysts--argue that during the 2004 election and throughout the Iraq war and occupation, Americans have been starved of democracy's oxygen: accurate information. More than anything John Kerry, George Bush, or even Karl Rove did, the media's miscoverage of the campaign and war decided the election. Most disturbingly, the flawed coverage reflects new, structural problems within U.S. journalism.

Tragedy and Farce dissects the media failures of recent years and shows how they expose the decline in resources and standards for political journalism--as well as the methodical campaign by the political right to control the news cycle. In our highly concentrated media system it has become commercially and politically irrational to do the kind of journalism a self-governing society requires.

John Nichols is The Nation's Washington correspondent, an editor at the Capital Times, and is co-founder of the national media reform organization Free Press. He is the author of The Rise and Rise of Richard B. Cheney and Jews for Buchanan. He lives in Madison, Wisconsin, and Washington, D.C. Robert W. McChesney is the Gutgsell Endowed Professor in the Department of Communication at the University of Illinois at Urbana-Champaign. He is the author of some two dozen books on media and political economy, including Digital Disconnect, Communication Revolution, and the award-winning Rich Media, Poor Democracy; a co-author, with John Nichols, of Tragedy and Farce; and a co-editor, with Ben Scott, of Our Unfree Press, and, with Victor Pickard, of Will the Last Reporter Please Turn Out the Lights (all published by The New Press). McChesney and Nichols are also the co-authors of the award-winning Dollarocracy: How the Money and Media Election Complex Is Destroying America. McChesney's work has been translated into thirty-one languages. He lives in Champaign, Illinois, and Madison, Wisconsin.
or
Not Currently Available for Direct Purchase
Copyright © 2020 American Booksellers Association