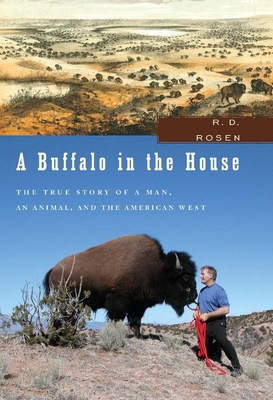 A Buffalo in the House

The True Story of a Man, an Animal, and the American West

A sprawling suburban house in Santa Fe is not the kind of home where a buffalo normally roams, but Veryl Goodnight and Roger Brooks are not your ordinary animal lovers. Over a hundred years after Veryl's ancestors, Charles and Mary Ann Goodnight, hand-raised two baby buffalo to help save the species from extinction, the sculptor and her husband adopt an orphaned buffalo calf of their own. Against a backdrop of the old American West, A Buffalo in the House tells the story of a household situation beyond any sitcom writer's wildest dreams.

Charlie has no idea he's a buffalo and Roger has no idea just how strong the bond between man and buffalo can be. In the historical shadow of the near-extermination of a majestic and misunderstood animal, Roger sets out to save just one buffalo.

Written in the tradition of Ian Frazier's Great Plains and the work of Garrison Keillor and Bill Bryson, A Buffalo in the House tells an important, uplifting story about one animal's ability to touch human lives and reconnect people of all ages to the vanished past.

R.D. Rosen is a senior editor at Workman Publishing and the author of several books, including the Edgar Award-winning mystery Strike Three You're Dead and Psychobabble (a term he coined). His career as a humorist has spanned PBS, Saturday Night Live, HBO, CBS, and NPR's All Things Considered. He is the co-author of the New York Times bestselling books Bad Cat, Bad Dog, Bad Baby, and Bad President. He lives in New York City.
Loading...
or
Not Currently Available for Direct Purchase