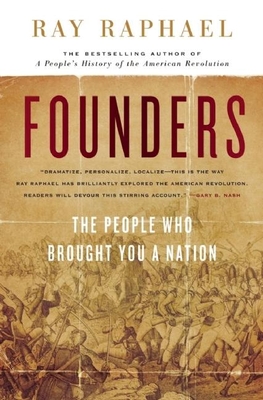 The People Who Brought You a Nation

Washington, Franklin, Jefferson, Hamilton, Adams, and Madison--together they are best known as an intimate cadre of daring, brilliant men credited with our nation's founding. But does this group tell the whole story? In his widely praised new history of the roots of American patriotism, celebrated author Ray Raphael expands the historical canvas to reveal an entire generation of patriots who pushed for independence, fought a war, and set the United States on its course--giving us an evangelizing introduction to the American Revolution (Booklist).

Called entertaining yet informative by Library Journal, Founders brings to life seven historical figures whose stories anchor a sweeping yet intimate history of the Founding Era, from the beginnings of unrest in 1761 through the passage of the Bill of Rights thirty years later. Here we follow the intertwined lives of George Washington and a private soldier in his army. America's richest merchant, who rescued the nation from bankruptcy, goes head to head with a peripatetic revolutionary who incited rebellion in seven states. Rounding out the company is a richly nuanced cast that includes a common village blacksmith, a conservative enslaver with an abolitionist son, and Mercy Otis Warren, the most politically engaged woman of the time.

A master narrative with unprecedented historical scope, Founders will forever change our image of this most crucial moment in America's past.

Ray Raphael has taught at a one-room public high school, Humboldt State University, and College of the Redwoods. His twelve books include Founding Myths, A People's History of the American Revolution, and The First American Revolution.
Loading...
or support indie stores by buying on