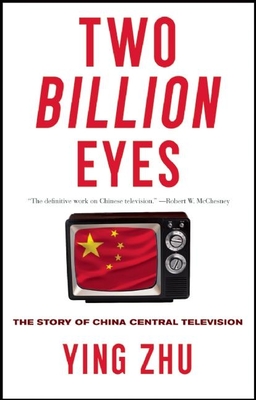 The Story of China Central Television

As China navigates the murky waters of a "third way" with liberal economic policies under a strict political regime, the surprising battleground for China's future emerges in the country's highest rated television network--China Central Television, or CCTV. With 16 internationally broadcast channels and over 1.2 billion viewers, CCTV is a powerhouse in conveying Chinese news and entertainment. The hybrid nature of the network has also transformed it into an unexpected site of discourse in a country that has little official space for negotiation. While CCTV programming is state sponsored--and censored--the popularity and profit of the station are determined by the people. And as the Chinese Communist Party seeks to exert its own voice on domestic and international affairs, the prospect of finding an amenable audience becomes increasingly paramount. Through a series of interviews with a fascinating cast of power players including a director of a special topic program that incited the 1989 student movement, current and past presidents of CCTV, and producers at the frontline of the network's rapidly evolving role in Chinese culture, celebrated media analyst Ying Zhu unlocks a doorway to political power that has long been shrouded in mystery.

"Ying’s cogent analysis and penetrating insight are invaluable for anyone trying to understand the political and social reality of the world’s most populous country."
Publishers Weekly

"A fascinating look at the news-entertainment-propaganda combine that plays a central role in how China understands itself, and is sure to play a larger role in China's relations with the outside world. I learned a lot about China, and about the news business, from this book."
James Fallows, author of China Airborne

"Ying Zhu's compelling analysis of CCTV is very much an 'inside' story. . .We are given not just the best book to date about Chinese television, but a far better understanding of the role of media in China's still developing model of state-society relations."
Stanley Rosen, professor of political science, University of Southern California

"Charged by the state with a global mission, and delivering everything from dramas and game shows to news, CCTV beams its programs from eight satellites to the world. Ying Zhu opens a window onto this complex, historically dynamic, and globally important institution. . . .Fascinating reading."
Dan Schiller, author of Digital Capitalism: Networking the Global Market System

"A must-read insider account for anybody interested in contemporary Chinese media, Two Billion Eyes provides timely access to rarely heard personal voices from practitioners at CCTV. . .Zhu has proved herself again to be an innovative scholar."
Yingjin Zhang, professor of Chinese, comparative literature, and cultural studies, University of California-San Diego

"If you want to know about the most important media institution in China, you have to read this book. Combining rare, in-depth interviews with fine-grained analysis, Zhu. . .makes a most significant contribution to our understanding of the complexity and ambitions of CCTV."
Wanning Sun, professor of media studies, University of Technology, Sydney

"Two Billion Eyes opens a fascinating window onto the emergence of a Chinese public sphere, with its convergence of information, crisis, culture, politics, competition, personalities, and programming. A host of probing and stimulating interviews reveal the people at work within these developments and transform Western stereotypes about state monopoly into a glimpse of concrete history, the sense of a genuine historical process underway in the China of the last three decades."
Fredric Jameson, professor of literature, Duke University

"The story of CCTV has never been told so fully, fascinatedly, and factually...Covering all dimensions of CCTV, from both historical and contemporary perspectives, Zhu’s book is remarkable for being scholarly and journalistic at the same time."
John Lent, Temple University

Ying Zhu is a professor of media culture at the City University of New York, College of Staten Island. The recipient of a fellowship from the National Endowment for the Humanities, she is the author or editor of seven other books, including Television in Post-Reform China and Chinese Cinema During the Era of Reform, and a co-producer of current affairs documentary films, including Google vs. China and China: From Cartier to Confucius. She resides in New York.
Loading...
or
Not Currently Available for Direct Purchase