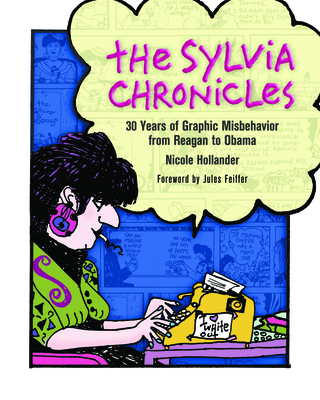 30 Years of Graphic Misbehavior from Reagan to Obama

For three decades, the nationally-syndicated cartoonist Nicole Hollander has channeled her ascerbic wit and razor-sharp sensibilities through the incomparable and irascible Sylvia, a Chicago original whose hilarious commentary on American life has won over millions of loyal readers. The Sylvia Chronicles presents Sylvia's singular take on contemporary politics, from the early days of Reagan to the latter days of Palin. Along the way, she takes on subjects as varied as varied as the hazards of allowing death row convicts a last smoke, an imaginary exchange with Donald Rumsfeld' younger brother, and the dangers of texting while driving an SUV and reaching across the seat for a snickers bar -- recording not only the most memorable, and memorably outrageous, events of the past three decades, but also the often-overlooked absurdities of our daily lives.

Nicole Hollander is the creator of Sylvia, an internationally syndicated comic strip that appears in over 80 newspapers, including the Chicago Tribune, the Detroit News, the Boston Globe, and the Seattle Times. She has published sixteen collections of Sylvia strips, as well as Female Problems and My Cat's Not Fat, He's Just Big Boned. She lives in Chicago.
or
Not Currently Available for Direct Purchase
Copyright © 2020 American Booksellers Association