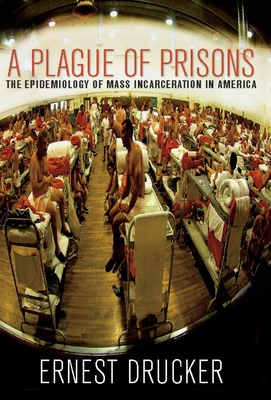 A Plague of Prisons (Hardcover)

The Epidemiology of Mass Incarceration in America

When Dr. John Snow first traced an outbreak of cholera to a water pump in the Soho district of London in 1854, the field of epidemiology was born. Taking the same public health approaches and tools that have successfully tracked epidemics of flu, tuberculosis, and AIDS over the intervening one hundred and fifty years, Ernest Drucker makes the case that our current unprecedented level of imprisonment has become an epidemic--a plague upon our body politic. Drucker, an internationally recognized public health scholar and Soros Justice Fellow, spent twenty years treating drug addiction and another twenty studying AIDS in some of the poorest neighborhoods of the South Bronx and worldwide. He
compares mass incarceration to other, well-recognized epidemics using basic public health concepts: "prevalence and incidence," "outbreaks," "contagion," "transmission," and "potential years of life lost." He argues that imprisonment--originally conceived as a response to individuals' crimes--has become mass incarceration: a destabilizing force that undermines the families and communities it targets, damaging the very social structures that prevent crime. Sure to provoke debate, this book shifts the paradigm of how we think about punishment by demonstrating that our unprecedented rates of incarceration have the contagious and self-perpetuating features of the plagues of previous centuries.

Ernest Drucker is a scholar in residence and senior research associate at John Jay College of Criminal Justice, City University of New York. He is professor emeritus of family and social medicine at Montefiore Medical Center/Albert Einstein College of Medicine and adjunct professor of epidemiology at Columbia University's Mailman School of Public Health. He is an NIH-funded researcher, editor-in-chief of the international Harm Reduction Journal, a Fulbright Senior Specialist in Global Health, and a Soros Justice Fellow. He is also a founder and former chairman of Doctors of the World/USA. He lives in New York City.

Praise For A Plague of Prisons: The Epidemiology of Mass Incarceration in America…

Ernest Drucker has added a new voice to the debate about prisons and provided a previously missing but enormously valuable scientific perspective. The book is both wonderfully written and packed with insight. People who already think they know a lot about the problem of mass incarceration will learn from this book, and people who don't know much about it will get everything they need to know.
Todd Clear, Dean of the Rutgers University School of Criminal Justice

A towering achievement, A Plague of Prisons does something rare and valuable: it provides a new way of looking at, thinking about, and analyzing old and familiar data, thereby creating fresh insights into and understanding of a social catastrophe.
Ira Glasser, Former Executive Director, American Civil Liberties Union

Drucker brings the tools of epidemiology, the informed perspective of a social critic, and the graceful language of a natural writer to illuminate the plague of incarceration that is crippling poor and primarily minority urban communities, and to make a clear, cogent call for reform.
Jamie Fellner, Senior Advisor, U.S. Program, Human Rights Watch

A seminal book by a truly gifted scholar. Read and weep and then pass along this important work to everyone who has a stake in reforming the contemporary U.S. criminal justice systemwhich is to say, all of us.
Stephen Flynn, Ph.D., President, Center for National Policy

A careful, colorful, and much needed examination of the causes and consequences of the epidemic of incarceration in the United States with enormous relevance for anyone concerned about public health, criminal justice, and public policy.
Jim Curran, Dean, Rollins School of Public Health and Co-Director, Emory Center for AIDS Research

Ernie Drucker has long been a leader in new ways of thinking about issues of crime and drugs. He’s helped us to imagine a true public health approach to these problems.
Marc Mauer, Executive Director of The Sentencing Project and author of Race to Incarcerate