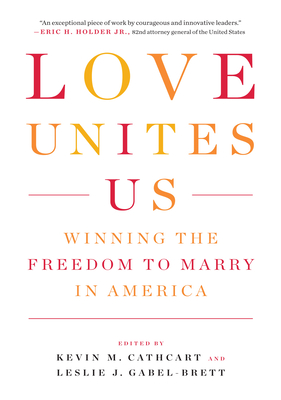 Winning the Freedom to Marry in America

Victory may sometimes look like a sudden revolution when, in truth, it rests on years of struggle. The June 2015 decision in Obergefell v. Hodges is a sweeping victory for the freedom to marry, but it was one step in a long process. Love Unites Us is the history of activists' passion and persistence in the struggle for marriage rights for same-sex couples in the United States, told in the words of those who waged the battle. Launching the fight for the freedom to marry was neither an obvious nor an uncontested strategy. To many activists, achieving marriage equality seemed far-fetched, but the skeptics were proved wrong. Proactive arguments in favor of love, family, and commitment were more effective than arguments that focused on rights and the goal of equality at work. Telling the stories of people who loved and cared for one another, in sickness and in health, cut through the antigay noise and moved people--not without backlash and not overnight, but faster than most activists and observers had ever imagined. With compelling stories from leading attorneys and activists including Evan Wolfson, Mary L. Bonauto, Jon W. Davidson, and Paul M. Smith, Love Unites Us explains how gay and lesbian couples achieved the right to marry.

Kevin Cathcart has been the executive director of Lambda Legal since 1992. Cathcart was involved in Lawrence v. Texas and marriage equality victories across the country. He lives in New York City. Leslie Gabel-Brett is the director of education and public affairs for Lambda Legal and lives in Brooklyn. Lambda Legal has offices in New York, Los Angeles, Chicago, Atlanta, and Dallas.
Loading...
or support indie stores by buying on