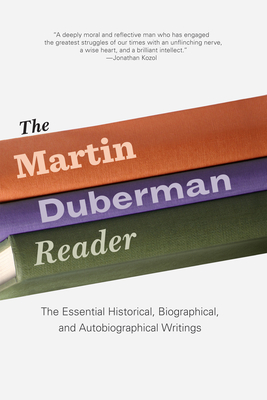 For the past fifty years, prize-winning historian Martin Duberman's groundbreaking writings have established him as one of our preeminent public intellectuals. Founder of the first graduate program in LGBT studies in the country, he is perhaps best known for his biographies of Paul Robeson, Lincoln Kirstein, and Howard Zinn--works that have been hailed as "magnificent" (USA Today), "enthralling" (The Washington Post), "splendid" and "definitive" (Studs Terkel, Chicago Sun-Times), and "refreshing and inspiring" (The New York Times). Duberman is also an equally gifted playwright and essayist, whose piercingly honest memoirs Cures and Midlife Queer have been called "witty and searingly candid" (Publishers Weekly), "wrenchingly eloquent" (Newsday), and "a moving chronicle" (The Nation). His writings have explored the shocking attempts by the medical establishment to "cure" homosexuality; Stonewall, before and after; the age of AIDS; the struggle for civil rights; the fight for economic and racial justice; and Duberman's vision for reclaiming a radical queer past from the creeping centrism of the gay movement. The Martin Duberman Reader assembles the core of Duberman's most important writings, offering a wonderfully comprehensive overview of our lives and times--and giving us a crucial touchstone for a new generation of activists, scholars, and readers.

Praise For The Martin Duberman Reader: The Essential Historical, Biographical, and Autobiographical Writings…

"A deeply moral and reflective man who has engaged the greatest struggles of our times with an unflinching nerve, a wise heart, and a brilliant intellect."
—Jonathan Kozol

"Duberman is an unapologetic, uncategorizable, and non-sectarian radical whose constant questioning of conventional wisdoms—even on the left—has made him one of this country's preeminent participants in the political and cultural wars that have riven public life."
—Doug Ireland

"Martin Duberman is known for his unique combination of talents—as a distinguished historian, a talented writer, and an impassioned advocate of gays and other beleaguered members of the human community."
—Howard Zinn

Martin Duberman is Distinguished Professor Emeritus of History at the CUNY Graduate Center, where he founded and for a decade directed the Center for Lesbian and Gay Studies. The author of more than twenty books--including Andrea Dworkin, Radical Acts, Waiting to Land, A Saving Remnant, Howard Zinn, Hold Tight Gently, and Paul Robeson: No One Can Silence Me (for young adults)--Duberman has won a Bancroft Prize and been a finalist for both the National Book Award and the Pulitzer Prize. He lives in New York City.
Loading...
or support indie stores by buying on