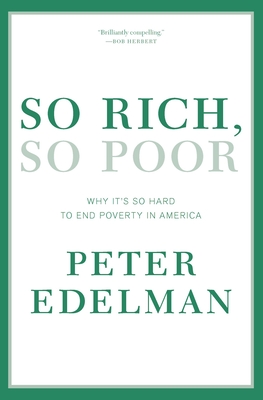 So Rich, So Poor

Why It's So Hard to End Poverty in America

If the nation's gross national income--over $14 trillion--were divided evenly across the entire U.S. population, every household could call itself middle class. Yet the income-level disparity in this country is now wider than at any point since the Great Depression. In 2010 the average salary for CEOs on the S&P 500 was over $1 million--climbing to over $11 million when all forms of compensation are accounted for--while the current median household income for African Americans is just over $32,000. How can some be so rich, while others are so poor? In this provocative book, Peter Edelman, a former top aide to Senator Robert F. Kennedy and a lifelong antipoverty advocate, offers an informed analysis of how this country can be so wealthy yet have a steadily growing number of unemployed and working poor. According to Edelman, we have taken important positive steps without which 25 to 30 million more people would be poor, but poverty fluctuates with the business cycle. The structure of today's economy has stultified wage growth for half of America's workers--with even worse results at the bottom and for people of color--while bestowing billions on those at the top. So Rich, So Poor delves into what is happening to the people behind the statistics and takes a particular look at the continuing crisis of young people of color, whose possibility of a productive life too often is lost on their way to adulthood. This is crucial reading for anyone who wants to understand the most critical American dilemma of the twenty-first century.

Praise For So Rich, So Poor: Why It's So Hard to End Poverty in America…

"A competent, thorough assessment from a veteran expert in the field."
—Kirkus

"Bobby believed that, as long as there is plenty, poverty is evil.’ Much has changed in forty-five years, but as Peter eloquently reminds us, far too many Americans remain trapped in the web of economic injustice. His compassionate and singular voice awakens our conscience and calls us to action."
—Ethel Kennedy

"Peter Edelman brings blinding lucidity to a subject usually mired in prejudice and false preconceptions. Before we have one more discussion of how America can combat its persistent and growing levels of poverty, could everyone please read this book?"
—Barbara Ehrenreich

"If there is one essential book on the great tragedy of poverty and inequality in America, this is it. Peter Edelman is masterful on the issue. With a real-world grasp of politics and the economy, Edelman makes a brilliantly compelling case for what can and must be done."
—Bob Herbert

Peter Edelman is a professor at Georgetown University Law Center. A top adviser to Senator Robert F. Kennedy from 1964 to 1968, he went on to fill various roles in President Bill Clinton's administration, from which he famously resigned in protest after Clinton signed the 1996 welfare reform legislation.
Loading...
or support indie stores by buying on