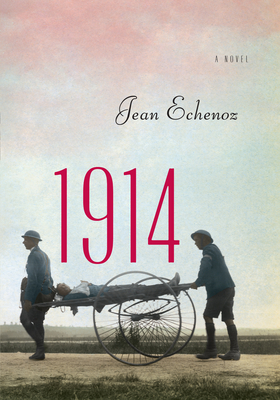 Jean Echenoz, considered by many to be the most distinguished and versatile living French novelist, turns his attention to the deathtrap of World War I in 1914. In it, five Frenchmen go off to war, two of them leaving behind a young woman who longs for their return. But the main character in this brilliant novel is the Great War itself. Echenoz, whose work has been compared to that of writers as diverse as Joseph Conrad and Laurence Sterne, leads us gently from a balmy summer day deep into the relentless--and, one hundred years later, still unthinkable--carnage of trench warfare. With the delicacy of a miniaturist and with an irony that is both witty and clear-eyed, Echenoz offers us an intimate epic: in the panorama of a clear blue sky, a bi-plane spirals suddenly into the ground; a piece of shrapnel shears the top off a man's head as if it were a soft-boiled egg; we dawdle dreamily in a spring-scented clearing with a lonely shell-shocked soldier strolling innocently toward a firing squad ready to shoot him for desertion. Ultimately, the grace notes of humanity in 1914 rise above the terrors of war in this beautifully crafted tale that Echenoz tells with discretion, precision, and love.