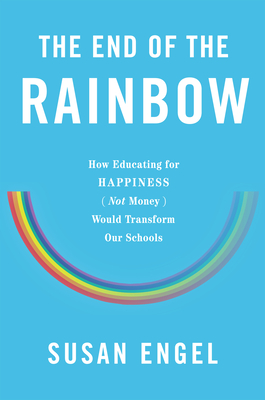 The End of the Rainbow (Hardcover)

Amid the hype of Race to the Top, online experiments such as Khan Academy, and bestselling books like The Sandbox Investment, we seem to have drawn a line that leads from nursery school along a purely economic route, with money as the final stop. But what price do we all pay for the increasingly singular focus on wage as the outcome of education? Susan Engel, a leading psychologist and educator, argues that this economic framework has had a profound impact not only on the way we think about education but also on what happens inside school buildings. The End of the Rainbow asks what would happen if we changed the implicit goal of education and imagines how different things would be if we made happiness, rather than money, the graduation prize. Drawing on psychology, education theory, and a broad range of classroom experiences across the country, Engel offers a fascinating alternative view of what education might become: teaching children to read books for pleasure and self-expansion and encouraging collaboration. All of these new skills, she argues, would not only cultivate future success in the world of work but also would make society as a whole a better, happier place. Accessible to parents and teachers alike, The End of the Rainbow will be the beginning of a new, more vibrant public conversation about what the future of American education should look like.

Susan Engel is a developmental psychologist in the Department of Psychology at Williams College, where she is also the founder and director of the Williams Program in Teaching. She is the author of four previous books, "The Stories Children Tell: Making Sense of the Narratives of Childhood," "Context is Everything: The Nature of Memory," "Real Kids: Creating Meaning in Everyday Life," and "Red Flags or Red Herrings: Predicting Who Your Child Will Become." During 2006-2007 she wrote a column on teaching for the "New York Times" titled Lessons. Engel has also made numerous appearances on radio and television, including on Good Morning America and The Today Show, as an expert on education and child-rearing.
or
Buy Here
Copyright © 2020 American Booksellers Association