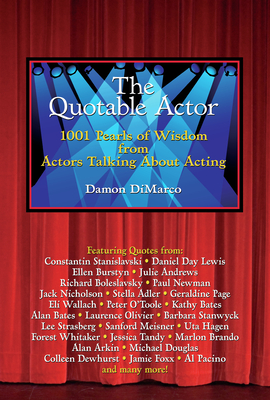 1001 Pearls of Wisdom from Actors Talking about Acting

Collecting advice, quotes, essays, and observations from hundreds of famous actors and highly regarded acting teachers, The Quotable Actor covers a wide range of topics on the art and history of acting. Entertaining, instructive, and informative, it is organized into specific, easy-to-search categories, such as On Why We Act; On Auditioning; On Struggling and Building a Career; and On Gender Differences and Aging in the Biz. From art and technique to business and lifestyle, entries include fascinating anecdotes and advice from some of the greatest actors in history: Marlon Brando commenting on the rehearsal process
Meryl Streep's advice on building a character
Al Pacino recalling what it was like to be a starving young artist
Beauty tips from some of Hollywood's leading ladies
Recollections of horrible auditions from A-list stars
Musings from Jack Nicholson, Edwin Booth, and many others Additional contributors include Constantin Stanislavski, Daniel Day-Lewis, Ellen Burstyn, Julie Andrews, Paul Newman, and Peter O'Toole--providing insights into the actor's craft that are equally useful to young actors just starting out and accomplished professionals looking for inspiration in the words of peers.

Damon DiMarco is the author of the oral history collections Tower Stories: An Oral History of 9/11 and Heart of War: Soldiers' Voices from the Front Lines in Iraq, as well as the coauthor of The Actor's Art and Craft with William Esper. DiMarco has taught acting and directing in the theater arts department of Drew University. As an actor, he has appeared in TV programs, commercials, independent films, and regional theater. He lives in New York City.
Loading...
or support indie stores by buying on