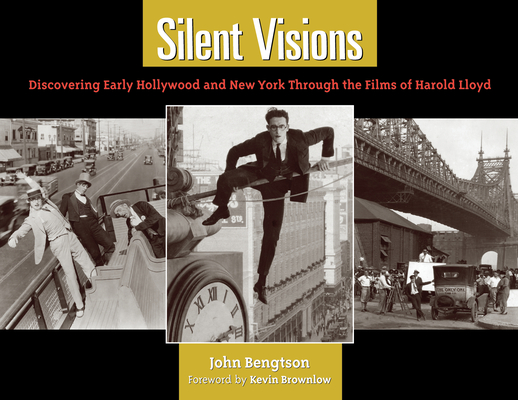 Immensely popular and prolific, Harold Lloyd sold more movie tickets during the Golden Age of Comedy than any other comedian. From Coney Island to Catalina Island, and from Brooklyn to Beverly Hills, Lloyd's movies captured visions of silent-era America unequaled on the silver screen.
A stunning work of cinematic archeology, "Silent Visions" describes the historical settings found in such Lloyd classics as "Safety Last , Girl Shy, " and "Speedy," and matches them with archival photographs, vintage maps, and scores of then-and-now comparison photographs, illuminating both Lloyd's comedic genius, and the burgeoning Los Angeles and Manhattan landscapes preserved in the background of his films.
The book represents John Bengtson's completion of his trilogy of works focusing on the three great geniuses of silent film comedy (Keaton, Chaplin, and Lloyd) in what Oscar-winning historian Kevin Brownlow calls "a new art form.

John Bengtson is a business lawyer and film historian who discovered the magic of silent comedy at an early age. He is the author of the critically acclaimed Silent Traces: Discovering Early Hollywood Through the Films of Charlie Chaplin, Silent Echoes: Discovering Early Hollywood Through the Films of Buster Keaton, and Silent Visions: Discovering Early Hollywood and New York Through the Films of Harold Lloyd. Bengtson has presented his work on Buster Keaton as keynote speaker at events hosted by the Academy of Motion Picture Arts and Sciences, the American Cinematheque at the Egyptian Theatre, and the UCLA Film and Television Archive. He is a featured columnist of the Keaton Chronicle newsletter, and lives in the San Francisco Bay area with his two daughters.
Loading...
or support indie stores by buying on