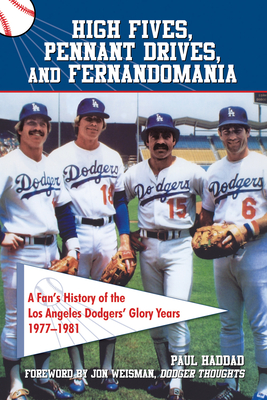 For Dodger fans, the years 1977 to 1981 mark the team's glory days, and "High Fives, Pennant Drives, and Fernandomania" chronicles the highlights and disappointments that marked those four tumultuous seasons.
Told from lifelong fan Paul Haddad's perspective, the story of the Dodgers during this time period is enhanced by transcripts of radio and TV calls that are woven into his personal recollections, capturing famed Dodgers sportscaster Vin Scully at the top of his game.
From Jerry Ruess's no-hitter and Rick Monday's epic homer against Montreal to the magical rookie year of Fernando Valenzuela and the 1981 World Series, all of the famous Dodger moments are commemorated in great detail.
In addition to the chronological narrative, each chapter contains lists, trivia, sidebars, and interesting statistics that make the exciting culture and fan frenzy that surrounded the Dodgers' last great dynasty come to life.

Paul Haddad is a television writer and producer who has worked with Discovery Networks, Fox Sports, the Travel Channel, and VH1, among others. His articles have appeared in such publications as Filmmaker, LA Sports & Fitness, and Los Angeles Times Magazine. He was featured in ESPN Films' Emmy-nominated 30 for 30 documentary series in an episode recapping the phenomenon of Fernandomania. He lives in Los Angeles. Jon Weisman is the proprietor of Dodger Thoughts, a writer and editor for Variety magazine, and has contributed to Sports Illustrated's SI.com. He is the author of 100 Things Dodgers Fans Should Know & Do Before They Die.
Loading...
or support indie stores by buying on