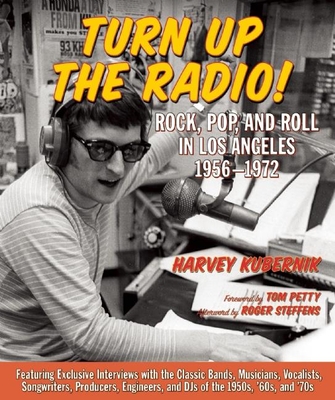 Turn Up the Radio! (Hardcover)

Combining oral and illustrated history with a connective narrative, Turn Up the Radio captures the zeitgeist of the Los Angeles rock and pop music world between the years of 1956 and 1972.
Featuring hundreds of rare and previously unpublished photographs and images of memorabilia, this collection highlights dozens of iconic bands and musicians, including the Doors, the Beach Boys, Buffalo Springfield, the Byrds, CSN, the Monkees, the Rolling Stones, Ike and Tina Turner, Elvis Presley, Eddie Cochran, Ritchie Valens, Neil Young, Joni Mitchell, Frank Zappa, Thee Midniters, Sonny and Cher, and many others.
The book also digs deep to uncover the studio musicians, background vocalists, songwriters, producers, and engineers who helped propel the Los Angeles rock and pop music scene to such a legendary status, such as Bones Howe, Barney Kessel, B. J. Baker, Merry Clayton, Jack Nitzsche, Jerry Leiber, Mike Stoller, Bobby Womack, and Kim Fowley.
Finally, Turn Up the Radio pays tribute to the DJs who brought the music of Los Angeles to fans throughout Southern Californiaand, ultimately, the worldincluding Art Laboe, Dave Hull, the Real Don Steele, and Dave Diamond.
Packed with exclusive interviews, this one-of-a-kind keepsake is a must-have for any music fan.

Harvey Kubernik, a native of Los Angeles, California, has been a noted music journalist for over forty years. A former West Coast A&R director for MCA Records, Kubernik is the author of five books, including This Is Rebel Music, A Perfect Haze: The Illustrated History of the Monterey International Pop Festival (co-authored by Kenneth Kubernik), and Canyon of Dreams: The Magic and the Music of Laurel Canyon. Kubernik's writings on popular music have been published nationally and internationally in the Los Angeles Times, MOJO, Goldmine, Musician, Melody Maker, Treats!, the Los Angeles Free Press, Crawdaddy!, Record Collector News, and many other periodicals and online outlets. His work has also been placed in several book anthologies, including The Rolling Stone Book of the Beats and Drinking with Bukowski. Kubernik has penned liner notes for a dozen albums by a diverse group of recording artists, most notably Elvis Presley, Allen Ginsberg, Carole King, and the Ramones. Tom Petty is an American musician, singer-songwriter, and multi-instrumentalist. Tom Petty and the Heartbreakers released their debut album in 1976. Petty has received numerous prestigious awards, including seventeen Grammy nominations. In 2002, he was inducted into the Rock and Roll Hall of Fame. He was also a member of the supergroup the Traveling Wilburys. Petty and his collaborators have sold over sixty million records. He lives in Los Angeles. Roger Steffens is the author or co-author of seven books on Bob Marley and reggae history, including Bob Marley and the Wailers: The Definitive Discography and The Reggae Scrapbook. He is also the founder of the award-winning Reggae Beat radio show with Hank Holmes on Santa Monica's NPR affiliate, KCRW. Steffens lives in Los Angeles.
or support indie stores by buying on
Copyright © 2020 American Booksellers Association