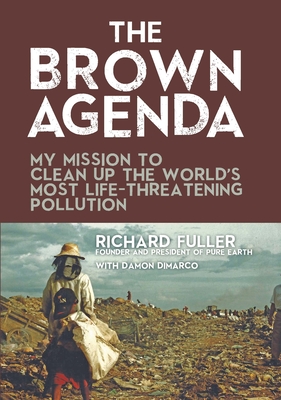 My Mission to Clean Up the World's Most Life-Threatening Pollution

Pollution is the single largest cause of death in the developing world. One in seven people in low- and middle-income countries die as a result of it. Simply put, pollution is now the world's most prevalent health risk.
And yet, while most everyone has heard about going green, few are aware of the more dire and sinister brown pollutionplaces where man-made toxic pollutants have taken root and spread. Brown sites poison millions of people every year, causing needless suffering and death.
After witnessing several brown sites firsthand and meeting families trapped by poverty in these toxic hot spots, environmentalist Richard Fuller founded the Blacksmith Institute, now renamed Pure Earth, a global nonprofit that initiates large-scale cleanups of some of the most polluted places on earth.
The Brown Agenda details Fuller's inspirational journeyfrom his dangerous yet ultimately successful fight to save hundreds of thousands of acres in the Amazon rain forest to his creation of Pure Earth.
In this vivid account of his perilous travels to the earth's most toxic locations, Fuller introduces readers to the plight of the poisoned poor, and suggests specific ways people everywhere can help combat pollution all over the world.

Richard Fuller is the founder and president of Pure Earth (formerly the Blacksmith Institute). Considered the world's leading expert on toxic issues, Pure Earth works closely with governments, local stakeholders, and international organizations around the world to combat the proliferation of toxic pollution in forty-five countries. In 2012, Fuller also led the formation of the Global Alliance on Health and Pollution, a collaborative body tasked with coordinating resources and activities to clean up chemicals, waste, and toxic pollution in low-and middle-income countries. The GAHP currently has thirty-two members, including many affected countries, UN agencies, and bilateral and multilateral donors such as the World Bank. Damon DiMarco is an author, actor, playwright, and historian who wrote Tower Stories: An Oral History of 9/11, a book telling the story of the September 11 attacks from the perspective of those who were directly affected by the event. Publisher's Weekly called Tower Stories a monumental work; MSNBC said it was arguably the most successful attempt at capturing the enormity of the events of 9/11. DiMarco has also authored Heart of War: Soldiers' Voices from the Front Lines in Iraq, and My Two Chinas: The Memoir of a Chinese Counter-Revolutionary (with Baiqiao Tang), as well as The Actor's Art & Craft and The Actor's Guide to Creating a Character (both with William Esper). Bryan Walsh is the Foreign Editor and Senior Writer on energy and the environment for Time magazine. He lives in New York City.
Loading...
or support indie stores by buying on