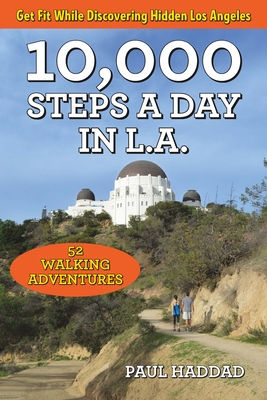 10,000 Steps a Day in L.A. is for urban adventurers with a passion for healthy living who are also eager to explore Los Angelesfrom its most legendary locations to its more hidden, unsung, and quirky sites.
In this first-ever book to explore the 10,000-steps lifestyle in Los Angeles, author Paul Haddad takes readers on a journey through the city's streets, beaches, mountains, rivers, reservoirs, and parks. He includes 10,000-step walks from throughout the Southland, from Simi Valley to the South Bay, and Pasadena to Pacific Palisades.
Tread the grounds of a defunct Disney attraction called Dwarfland. Trace the extinct canals of Venice Beach. Stroll the shortest Main Street in America. Discover hidden streams, secret murals, lost cities, Hollywood haunts, houses made of stone, and parks that time forgot
10,000 Steps a Day in L.A. features:
52 walks containing 10,000 steps
Detailed maps and directions
Descriptions of the terrain, walking surface, and dog-friendliness of each walk
Parking suggestions
Sidebars with colorful trivia and anecdotes
Most importantly, 10,000 Steps a Day in L.A. offers a sense of fun and discovery about Los Angeles that makes the goal of 10,000 steps easy to attain. Readers need only bring their feetpedometers are optional

Paul Haddad is the author of High Fives, Pennant Drives, and Fernandomania: A Fan's History of the Los Angeles Dodgers' Glory Years 1977-1981. It was chosen as one of the top baseball books of 2012 by the Los Angeles Daily News and earned praise from the L.A. Times, Fox News, NBC News, Yahoo!, ESPN Radio, and CBS Radio. Born in Hollywood, Haddad has contributed essays about Los Angeles to the L.A. Times and the Huffington Post. When he is not writing books, he works as a television writer and executive producer.
Loading...
or
Not Currently Available for Direct Purchase