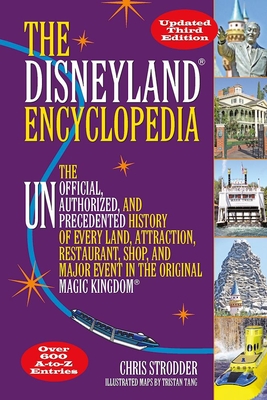 The Unofficial, Unauthorized, and Unprecedented History of Every Land, Attraction, Restaurant, Shop, and Major Event i

Completely updated and expanded with over 50 new entries and 300 new photos, The Disneyland Encyclopedia spans the entire history of the park, from its founding more than 50 years ago to the present day. This fascinating book features detailed explorations of 600 Disneyland topics, including lands, attractions, restaurants, stores, events, and significant people. Each of the main encyclopedia entries illuminates the history of a Disneyland landmark, revealing the initial planning strategies for the park's iconic attractions and detailing how they evolved over the decades. Enriching this unique A-to-Z chronicle are profiles of the personalities who imagined and engineered the kingdom known as "The Happiest Place on Earth." Discover unbuilt concepts, including Liberty Street, Rock Candy Mountain, and Chinatown, and delight in fascinating trivia about long-lost Disneyland features, from the real rifles in the shooting gallery that was once located on Main Street to the jet-packed Rocket Man who flew above Tomorrowland. The new "Mouscellany feature adds fun facts, hidden secrets, and odd trivia to the third edition. Overflowing with meticulously researched details and written in a spirited, accessible style, The Disneyland Encyclopedia is a comprehensive and entertaining exploration of the most-influential, most-renovated, and most-loved theme park in the world.

This third edition of The Disneyland Encyclopedia is Chris Strodder's tenth book. Among his other works are The Disneyland Book of Lists (2015), the children's book A Sky for Henry, an adventure story for young adults called Lockerboy, the comic novel The Wish Book, the Stories Light and Dark collection of short fiction, a pop culture compendium entitled The Encyclopedia of Sixties Cool, and Swingin' Chicks of the '60s, a popular nonfiction volume of profiles that garnered international attention, as well as coverage in dozens of magazines ranging from the National Enquirer to Playboy, and exposure on national TV and radio shows. Chris's writing has also appeared in Los Angeles magazine, The Hollywood Reporter, The Huffington Post, USA Today, California magazine, Movieline magazine, and others. The Disneyland Encyclopedia was named a "Best Reference Book" by Library Journal. An avid Disneyland visitor and collector since 1966, Strodder lives by the beautiful Pacific Ocean in Pismo Beach, California.
Loading...
or support indie stores by buying on