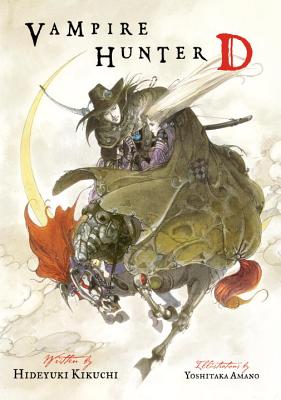 12,090 A.D. It is a dark time for the world. Humanity is just crawling out from under three hundred years of domination by the race of vampires known as the Nobility. The war against the vampires has taken its toll; cities lie in ruin, the countryside is fragmented into small villages and fiefdoms that still struggle against nightly raids by the fallen vampires-and the remnants of their genetically manufactured demons and werewolves.

Every village wants a Hunter-one of the warriors who have pledged their laser guns and their swords to the eradication of the Nobility. But some Hunters are better than others, and some bring their own kind of danger with them...

From creator Hideyuki Kikuchi, one of Japan's leading horror authors with illustrations by renowned Japanese artist, Yoshitaka Amano, best known for his illustrations in Neil Gaiman's Sandman: The Dream Hunters and the Final Fantasy games.

Hideyuki Kikuchi is a Japanese author famous for his horror novels. His most famous works include the Vampire Hunter D series, Darkside Blues, and Wicked City. He has been compared to both Stephen King and H. P. Lovecraft. Kikuchi was born in Chōshi, Japan, on September 25, 1949. He attended Aoyama Gakuin University and was trained as a writer by famed author Kazuo Koike. His first novel, Demon City Shinjuku, was published in 1982. Kikuchi became close friends with writer and director Yoshiaki Kawajiri during his adaption of Wicked City and the two have since collaborated on Vampire Hunter D: Bloodlust and the OVA of Demon City Shinjuku.

Yoshitaka Amano is a comic book and manga creator, artist, and cover artist known for his work on Aliens, Sandman, and Speed Racer.
Loading...
or
Not Currently Available for Direct Purchase