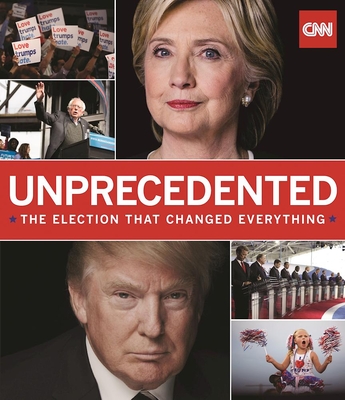 The Election That Changed Everything

Unprecedented's second printing features a new cover for the inauguration, with an exclusive portrait of the president-elect.
Packed with exclusive photojournalism and new revelations straight from the front lines, Unprecedented: The Election That Changed Everything chronicles the most hard- fought and newsworthy election of our time. The book tells the full story of the 2016 U.S. presidential campaign, as a Republican field of seventeen candidates battled it out until one remained: a blustery billionaire and reality TV star with no respect for the rules of politics and no fear of offending people. Across the aisle, Democrats witnessed a showdown between an unlikely populist hero in Sen. Bernie Sanders and the more well-known establishment candidate, Hillary Clinton, who was hobbled by scandal in her second attempt to become America's first woman president.
The first-ever book from CNN Politics, Unprecedented unleashes new reporting on every jab between a major party's first female presidential nominee and a political neophyte who many discounted. Featuring a foreword by CNN's chief Washington correspondent, Jake Tapper, and an introduction by historian Douglas Brinkley, Unprecedented reveals new insight and emotion while telling a story that will change America forever.
Authored by top CNN writer Thomas Lake and edited by award-winning veteran political reporter Jodi Enda, Unprecedented is filled with exclusive photos, commentary and insights from some of CNN's greatest contributors, including author Carl Bernstein, correspondent Brian Stelter and Pulitzer Prize-winning photographer David Hume Kennerly. Together, their work makes this book the ultimate way to feel and understand the epic event it chronicles, an election like no other.

Thomas LakeThomas Lake is one of CNN's top writers. Recognized for his historic work in Sports Illustrated and in newspapers like The Washington Post and the Wall Street Journal, Lake is a skilled author adept at capturing characters on all sides of every story. Jodi EndaAn award-winning political reporter, Jodi Enda has been specifically recognized for her investigative stories and coverage of the White House, gathering journalism awards from The Robert F. Kennedy Center for Justice and Human Rights, the White House Correspondents' Association and the Society of Professional Journalists. Contributor Residences Thomas LakeAtlanta, GA Jodi EndaWashington, DC
Loading...
or support indie stores by buying on