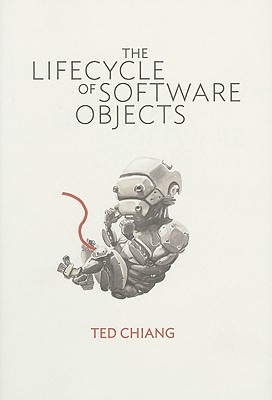 The Lifecycle of Software Objects

What's the best way to create artificial intelligence? In 1950, Alan Turing wrote, 'Many people think that a very abstract activity, like the playing of chess, would be best. It can also be maintained that it is best to provide the machine with the best sense organs that money can buy, and then teach it to understand and speak English. This process could follow the normal teaching of a child. Things would be pointed out and named, etc. Again I do not know what the right answer is, but I think both approaches should be tried.'


The first approach has been tried many times in both science fiction and reality. In this new novella, at over 30,000 words, his longest work to date, Ted Chiang offers a detailed imagining of how the second approach might work within the contemporary landscape of startup companies, massively-multiplayer online gaming, and open-source software. It's a story of two people and the artificial intelligences they helped create, following them for more than a decade as they deal with the upgrades and obsolescence that are inevitable in the world of software. At the same time, it's an examination of the difference between processing power and intelligence, and of what it means to have a real relationship with an artificial entity.


Is science fiction a literature of ideas, or of characters? Works that focus on the former often neglect the latter, and vice versa. It's very difficult to examine complex abstractions and simultaneously articulate the mechanisms of fiction: most writers who attempt this balancing act end up throttling back on the ideas, or fail sideways into technical writing. So Chiang's novella--the second piece he's ever published that's long enough to stand on its own, following the 2007 Hugo- and Nebula-winning The Merchant and the Alchemist's Gate--is a welcome surprise: a triumphant combination of the rigorous extrapolation of artificial intelligence and artificial life, two of the high concepts of contemporary SF, with an exploration of its consequences for the ordinary people whose lives it derails. Ana Alvarado is a former zookeeper turned software tester. When Blue Gamma offers her a job as animal trainer for their digients--digital entities, spawned by genetic algorithms to provide pets for players in the future virtual reality of Data Earth--she discovers an unexpected affinity for her charges. So does Derek Brooks, an animator who designs digient body parts. The market for digients develops and expands, cools and declines after the pattern of the software industry. Meanwhile Ana, Derek, and their friends become increasingly attached to their cute and talkative charges, who are neither pets nor children but something wholly new. But as Blue Gamma goes bust and Data Earth itself fades into obsolescence, Ana and the remaining digient keepers face a series of increasingly unpleasant dilemmas, their worries sharpened by their charges' growing awareness of the world beyond their pocket universe, and the steady unwinding of their own lives and relationships into middle-aged regrets for lost opportunities. Keeping to the constraints of a novella while working on a scale of years is a harsh challenge. Chiang's prose is sparse and austere throughout, relying on hints and nudges to provide context. At times, the narrative teeters on the edge of arid didacticism; there are enough ideas to fill a lesser author's trilogy, but much of the background is present only by implication, forcing the reader to work to fill in the blanks. (Indeed, this story may be impenetrable to readers who aren't at least passingly familiar with computers, the Internet, and virtual worlds such as Second Life.) Fortunately, sheer conceptual density keeps the story solidly real. The life cycle of the software objects in question is viewed through the prism of the human protagonists' own life cycle, and this skeleton is the armature on which hangs that very rare thing: a science fictional novel of ideas that delivers a real human impact. --Publishers Weekly