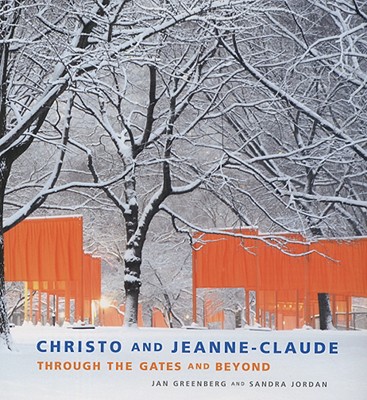 Through the Gates and Beyond

In 1981 two artists -- Christo and Jeanne-Claude -- proposed an installation in New York's Central Park that would span twenty-three miles. They received a 185-page response from the Parks Department that could have been summed up in one single word: "no." But they persisted. This biography of contemporary artists Christo and Jeanne-Claude is a story of the power of collaboration, and vision, and of the creation of the spectacular Gates and other renowned artworks.
"Christo and Jeanne-Claude" is a 2003 Bank Street - Best Children's Book of the Year.


Praise For Christo and Jeanne-Claude: Through the Gates and Beyond…

Booklist, Starred review "This book, chronicling both The Gates as well as the artists’ other projects, is as thoughtful, eye-opening, and meticulous as the work it celebrates...Working in tandem are beautifully reproduced photographs (including a fabulous fold-out) that chronicles other grand projects, past and future. Solid back matter complements a stunningly designed book that can’t help but excite readers about art." Kirkus Reviews, Starred review
"In an immoderately engaging profile of arguably the most visible and widely known public artists alive today, Greenberg and Jordan retrace the duo’s career and capture a sense of the wonder that their large-scale projects evoke....Based largely on interviews with the artists, this perceptive study is illustrated with big, eye-filling color photos—capped by a terrific foldout view of Christo at work in his shabby (last painted in 1964), cluttered New York studio. Quoting Jeanne-Claude’s provocative “It has no purpose. It is not a symbol. It is not a message,” the authors challenge readers/viewers in simple but never simplistic language to think long thoughts about the nature of art and their own personal responses to it."