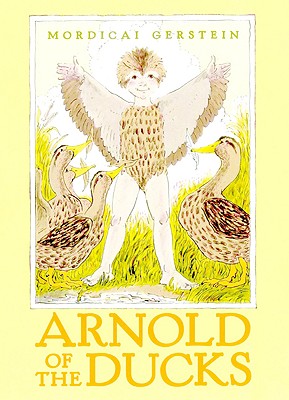 Arnold of the Ducks (Hardcover)

Available again! Caldecott Medal winner Mordicai Gerstein’s first picture book is even more whimsical and enchanting in its new edition than it was when it was first published twenty-five years ago.

Mordicai Gerstein is the author and illustrator of "The Man Who Walked Between the Towers," winner of the Caldecott Medal, and has had four books named "New York Times" Best Illustrated Books of the Year. Gerstein was born in Los Angeles in 1935. He remembers being inspired as a child by images of fine art, which his mother cut out of "Life" magazine, and by children's books from the library: "I looked at Rembrandt and Superman, Matisse and Bugs Bunny, and began to make my own pictures." He attended Chouinard Art Institute in Los Angeles, and then got a job in an animated cartoon studio that sent him to New York, where he designed characters and thought up ideas for TV commercials. When a writer named Elizabeth Levy asked him to illustrate a humorous mystery story about two girls and a dog, his book career began, and soon he moved on to writing as well as illustrating. "I'm still surprised to be an author," he says. "I wonder what I'll write next?" Gerstein lives in Westhampton, Massachusetts.

Praise For Arnold of the Ducks…

"Undiminished by the passage of time, this tale of transformation and self-discovery-and its endearingly intrepid protagonist-will still captivate kids."--School Library Journal "Arnold's retraining as a human ... is almost as funny as his education as a duck. In the droll, energetic pictures, he's lovable either way."--Kirkus Reviews