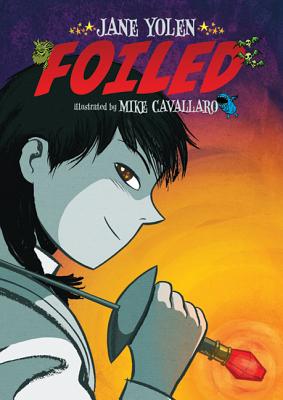 Aliera Carstairs just doesn't fit in. She's always front and center at the fencing studio, but at school she's invisible. And she's fine with that . . . until Avery Castle walks into her first period biology class. Avery may seem perfect now, but will he end up becoming her Prince Charming or just a toad?

“Yolen's first foray into the graphic format is a success precisely because she incorporates the best weapon in her arsenal - fantasy. In Aliera she has created a strong, conflicted, and relatable girl hero who wields her wariness for protection. Cavallaro's artwork suits Aliera's monochrome existence, but bursts to life when she finally sees (in color!) the faerie beasties cheering her on.” —Courtney Jones, Booklist

“Veteran fantasist Yolen introduces the utterly charming and sassy Aliera, a quirky tenth-grade loner who's both color-blind and an expert fencer, in this charming graphic novel ... An enchanting tale, with hints of a possible continuance. For fantasy lovers, this is an absolute must-read. (Graphic fantasy. 12 & up)” —Kirkus Reviews

“Cavallaro's art is rounded and cartoony, handling action and the fantasy elements well while skimping a bit on characterization-his Avery is just a sorta cute cartoon boy, not a devastating heartbreaker, but Aliera is a strong and likable protagonist. Yolen weaves her knowledge of fencing vividly throughout the plot, powerfully creating romance, mystery, adventure, fantasy, and drama, all rolled into a strong narrative.” —Publishers Weekly

MIKE CAVALLARO is from New Jersey and has worked in comics and animation since the early 1990s. His comics include “Parade (with fireworks)” (Shadowline/Image Comics), a Will Eisner Award-nominee; "The Life and Times of Savior 28” (IDW), with Eisner Award-winning writer J.M. DeMatteis; and the “Foiled” series with Jane Yolen and “Decelerate Blue” with Adam Rapp, both published with First Second Books.

Mike is an instructor at the School of Visual Arts in New York City, and is the Vice-Chairman of the Manhattan Chapter of the National Cartoonists Society.