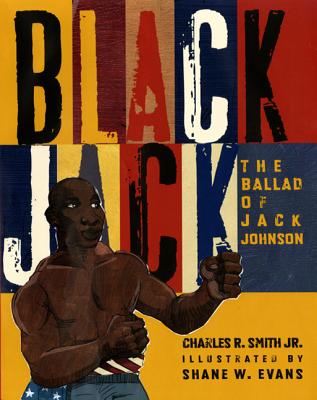 The Ballad of Jack Johnson

Born as Arthur John Johnson in the southern state of Texas, Jack Johnson was one of the most renowned boxers of the twentieth century. Through hard work and persistence, he climbed the ranks, taking a swing and a jab and eventually busting the color barrier. As the first black man to win the Heavyweight Championship, there was more than a title on the line.
Published to commemorate the 100th anniversary of this history-making bout (July 4, 1910). This is an extraordinary marriage of poetry, fabulous collage artwork, and a splendid achievement in its own right.


Praise For Black Jack: The Ballad of Jack Johnson…

“Charles Smith's poetry surges along, with a forceful rhythm that joins ballad and rap, as he follows "a mighty, fightin' man," challenging the color line as well as individual opponents around the world. Shane Evans' illustrations make Johnson's body a monument to intelligence and power.” —Chicago Tribune

“This book is sure to be championed by reluctant readers with energy and restlessness just like Johnson's, but it is a strong selection for library and classroom read-alouds as well.” —Starred, School Library Journal

“The poetry is interspersed with quotes of the time, and illustrator Evans uses oil paint and ink to depict the somber, determined fighter, with collage elements of newspaper articles, maps, and crowds in the backgrounds to set the story firmly in time and place.” —Horn Book

“Through poetry, quotations and some prose, the life of one of boxing's most important stars is celebrated, from his youth as the victim of bullies to the 1908 championship bout against a white fighter that made him a legend.” —Kirkus Reviews