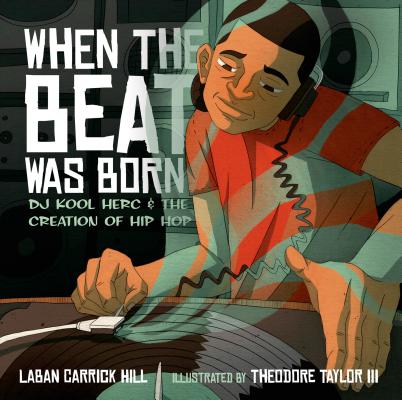 When the Beat Was Born

DJ Kool Herc and the Creation of Hip Hop

Before there was hip hop, there was DJ Kool Herc.

On a hot day at the end of summer in 1973 Cindy Campbell threw a back-to-school party at a park in the South Bronx. Her brother, Clive Campbell, spun the records. He had a new way of playing the music to make the breaks—the musical interludes between verses—longer for dancing. He called himself DJ Kool Herc and this is When the Beat Was Born. From his childhood in Jamaica to his youth in the Bronx, Laban Carrick Hill's book tells how Kool Herc came to be a DJ, how kids in gangs stopped fighting in order to breakdance, and how the music he invented went on to define a culture and transform the world.


Praise For When the Beat Was Born: DJ Kool Herc and the Creation of Hip Hop…

“...an expert biography of a hip hop and rap pioneer, and a not-to-be-missed picture-book debut by Taylor, a Washington, D.C. –based artist” —Publishers Weekly

“Hill also highlights the positive social force of hip-hop and the boundless energy of musical joy. It's all matched by Taylor's freewheeling artwork. A treat from an underrepresented corner of music history.” —Booklist

“Hill's narration deftly balances detail and momentum, addressing technical innovations while conveying the excitement of listeners on the scene at the birth of something new. Taylor's delicate linework is swept with streaks of earthy browns and muted greens and reds, suggesting swirls and blasts of sound bombarding the old school crowds.” —BCCB

Laban Carrick Hill is the author of America Dreaming: How Youth Changed America in the 60s, Harlem Stomp!: A Cultural History of the Harlem Renaissance, which was a National Book Award finalist, and Dave the Potter, a Caldecott Honor book, illustrated by Bryan Collier. He lives in Burlington, Vermont.

Theodore Taylor III is a children's book author and illustrator living in Richmond, Virginia with his wife Sarah and son Theo. He is the illustrator of Woke, Woke Baby, and the New York Times bestselling C is for Country by Lil Was X. He also received the Coretta Scott King John Steptoe New Talent Award for his work on When The Beat Was Born: DJ Kool Herc and the Creation of Hip Hop. He is also the illustrator behind Shaquille O'Neal's Little Shaq Series. During the day he also works as a front-end web developer. His work is inspired by his love of music, comics, animation, video games, street art, and more. He is also a self-proclaimed pizza connoisseur.
Loading...
or support indie stores by buying on