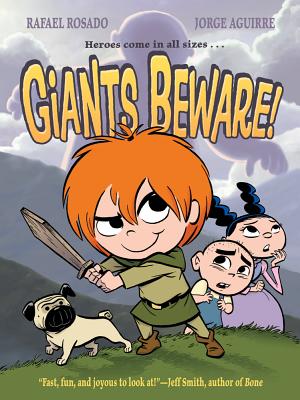 Giants Beware! (The Chronicles of Claudette)

“Claudette wants to be a giant slayer just like her father, but why should she wait until she grows up? The villagers tell stories of a terrible giant who loves nothing more than baby feet. If Claudette can just open her father's secret chest, she'll have everything she needs to defeat a giant. Once she secures the aid of her brother, an aspiring pastry chef, and her best friend, who wants nothing more than to be a princess, Claudette sets out to slay the giant. With a spunky, pint-sized heroine and a surprising ending, Giants Beware! is certain to be a hit!”
— Marika McCoola, Odyssey Bookshop, South Hadley, MA
View the List

Make way for Claudette the giant slayer in this delightful, fantastical adventure!

Claudette's fondest wish is to slay a giant. But her village is so safe and quiet! What's a future giant slayer to do?

With her best friend Marie (an aspiring princess), and her brother Gaston (a pastry-chef-to-be), Claudette embarks on a super-secret quest to find a giant—without parental permission. Can they find and defeat the giant before their parents find them and drag them back home?

Giants Beware! offers up a wondrous, self-contained world in the tradition of the very best of Pixar. Claudette and her friends will have you laughing out loud from page one.


Praise For Giants Beware! (The Chronicles of Claudette)…

"The story, with its riffs on fairy tales and quest narratives, offers just the right balance of familiarity and originality, with plenty of humorous asides."—The New York Times

"This is one book that readers are sure to enjoy again and again."—Children's Literature

"The story strikes a fine balance between beingaction-and friendship-driven. The art is similarly well-balanced: Rosado’s inkdrawings are strong and lively, with expressive characters and well-drawnlandscapes."—School Library Journal, starred review

"Entertaining, lively, and downright goofy, this willfind an audience among fans of fairy tales and comic books alike."—The Bulletin of the Center for Children’s Books

“Fast, fun, and joyous to look at!” —Jeff Smith, author of Bone

“A young heroine and her two sidekicks set off on adventure in Giants Beware!” —The New York Times

“The writing is great, the artwork is just stupendous - I can't recommend this book highly enough!” —BoingBoing Geek Week Podcast

Jorge Aguirre is a Colombian-American from Columbus, Ohio. He’s written for everything from the most popular children’s shows to documentaries about Romanian exorcisms. He is the author of Giants Beware! He lives on the East Coast.
Loading...
or support indie stores by buying on