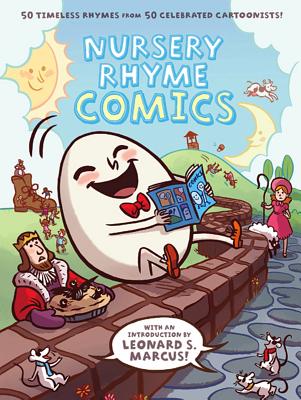 “Take 50 incredible artists, give them each a classic nursery rhyme, and let them run! Lucy Knisley turns the 'Old Lady Who Lived in a Shoe' into a rock-and-roll baby sitter whose charges form the band 'The Whips.' Raina Telgemeier sets 'Georgie Porgie' at a birthday party that ends with a cupcake fight. Dave Roman depicts a surreal, sci-fi 'One, Two, Buckle My Shoe' that is completely different from Patrick McDonnell's sweet 'Donkey.' A fabulous introduction to the comics format for young and old alike.”
— Marika McCoola, Odyssey Bookshop, South Hadley, MA
View the List

First Second is very proud to present Nursery Rhyme Comics. Featuring fifty classic nursery rhymes illustrated and interpreted in comics form by fifty of today's preeminent cartoonists and illustrators, this is a groundbreaking new entry in the canon of nursery rhymes treasuries.

From New Yorker cartoonist Roz Chast's "There Was a Crooked Man" to Bad Kitty author Nick Bruel's "Three Little Kittens" to First Second's own Gene Yang's "Pat-a-Cake," this is a collection that will put a grin on your face from page one and keep it there.

Each rhyme is one to three pages long, and simply paneled and lettered to ensure that the experience is completely accessible for the youngest of readers. Chock full of engaging full-color artwork and favorite characters (Jack and Jill! Old Mother Hubbard! The Owl and the Pussycat!), this collection will be treasured by children for years to come.

Chris Duffy is a writer and comics editor. He worked as Senior Comics Editor at the award-winning Nickelodeon Magazine for 13 years and currently edits SpongeBob Comics for United Plankton Pictures, as well as other projects. Chris was part of the board of advisors for Art Spiegelman and Françoise Mouly’s TOON TREASURY OF CLASSIC CHILDREN’S COMICS. His comic book writing includes scripts for BIZARRO COMICS, BIZARRO WORLD, SUPERMAN ADVENTURES, SCOOBY-DOO, WHAT IF?, RUGRATS COMIC ADVENTURES, and BATMAN CHRONICLES. He wrote comics strips for FAMILY DOG MAGAZINE. Comics that he has written and drawn have appeared in several anthologies, including AWESOME, AWESOMER, and DRAGONS! He lives with his family in Cold Spring, New York.

Leonard S. Marcus is one of the world’s leading writers about children’s books and the people who create them. His own award-winning books include Randolph Caldecott: The Man Who Could Not Stop Drawing; Listening for Madeleine: A Portrait of Madeleine L'Engle in Many Voices; Dear Genius: The Letters of Ursula Nordstrom; Minders of Make Believe; and The Annotated Phantom Tollbooth. He lives in Brooklyn, New York.

Jules Feiffer has won a number of prizes for his cartoons, plays, and screenplays, including the Pulitzer Prize for editorial cartooning. His books for children include The Man in the Ceiling, I’m Not Bobby!, A Room with a Zoo, and Bark, George. He illustrated Norton Juster’s children’s classic, The Phantom Tollbooth. He lives in New York City.

Roz Chast was born in Brooklyn and now lives in Connecticut. Her cartoons have appeared in countless magazines, and she is the author of many books, including The Party, After You Left.

She attended Rhode Island School of Design, majoring in Painting because it seemed more artistic. However, soon after graduating, she reverted to type and began drawing cartoons once again.