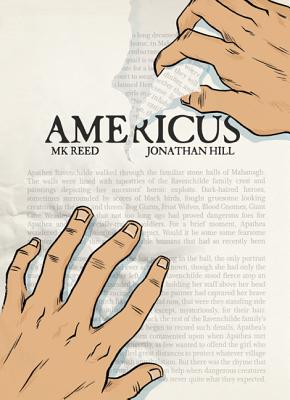 A graphic novel about a small town where the proposed banning of a fantasy book series sets neighbor against neighbor--perfect for teens and anyone who loves books.

Neal Barton just wants to read in peace. Unluckily for him, some local Christian activists are trying to get his favorite fantasy series banned from the Americus public library on grounds of immoral content and heresy. Something has to be done, and it looks like quiet, shy Neal is going to have to do it. With youth services librarian Charlotte Murphy at his back, Neal finds himself leading the charge to defend the mega-bestselling fantasy series that makes his life worth living.

This is a funny, gripping, and relatable tale of life and local politics in middle America,

“[Reed’s] ear for the speech of teenagers is especially sharp, rendering the scenes from high school the most consistently true-to-life and painfully hilarious in the book.” - The Comics Journal

Jonathan Hill is an Ignatz-nominated cartoonist who lives in Portland, Oregon, with his wife and cat. He was the artist on Americus and has had work in books from Fantagraphics, Dark Horse, and Roar. He also teaches comics in the illustration department of the Pacific Northwest College of Art.

“Hill's black and white illustrations, full of clean, bold lines, fill the tale with a sense of drama and action, even when the characters are reading silently. Americus is ultimately a reminder of the small miracles a good book can conjure up, in individual lives and across communities.” - Publishers Weekly
or support indie stores by buying on
Copyright © 2020 American Booksellers Association