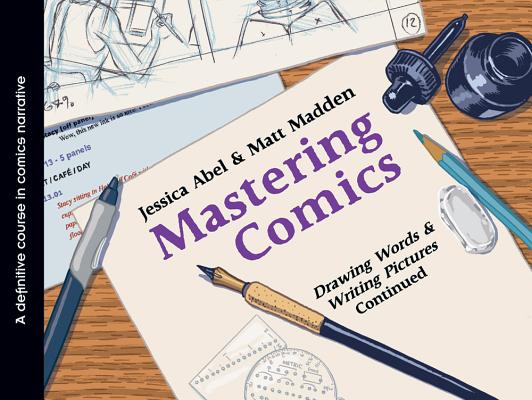 In their hotly anticipated follow-up to 2008's comics textbook Drawing Words & Writing Pictures, School of Visual Arts cartooning professors Matt Madden and Jessica Abel bring their expertise to bear on the "second semester" of a course of study for the budding cartoonist.

Covering advanced topics such as story composition, coloring, and file formatting, Mastering Comics is a vital companion to the introductory content of the first volume.

"For the artist/writer who is seriously interested in creating comics, both books in this series are a must-have resource."—Children's Literature

Winner of both the Harvey and Lulu Awards for Best New Talent in 1997, Jessica Abel is the author of Soundtrack and Mirror, Window, two comic collections culled from her comic book series, Artbabe. Her La Perdida (Pantheon, 2006) won the Harvey Award for Best New Series and was excerpted in 2006’s Best American Comics. She resides in Brooklyn, NY.

Matt Madden is a comics creator and teacher at New York's School of Visual Arts. He is the creator of the graphic novels Black Candy, Odds Off, and A Fine Mess, and of the comics theory book 99 Ways to Tell a Story. He is the co-editor (with Jessica Abel) of the Best American Comics series. He lives in Brooklyn, NY.
Loading...
or support indie stores by buying on
(This book is on backorder)