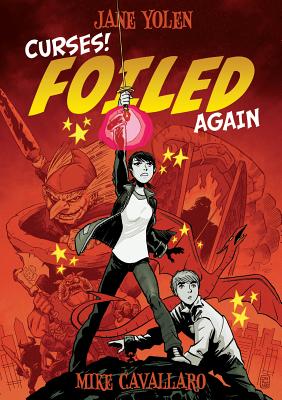 Aliera Carstairs is back. This time she's got her cousin—and best friend—Caroline in tow, and the stakes are higher than ever. The realm of Seelie, the fairy kingdom of which Aliera is the hereditary defender, is under attack, and only Aliera and Caroline can set things right. Caroline, fragile and wheelchair-bound, may seem like more of a liability than an asset, but Aliera knows there's more to her quiet cousin than meets the eye. Curses! Foiled Again, a follow up to graphic novel Foiled! is Jane Yolen at her best, reunited with her partner in crime, the fabulously talented illustrator Mike Cavallaro.

MIKE CAVALLARO is from New Jersey and has worked in comics and animation since the early 1990s. His comics include “Parade (with fireworks)” (Shadowline/Image Comics), a Will Eisner Award-nominee; "The Life and Times of Savior 28” (IDW), with Eisner Award-winning writer J.M. DeMatteis; and the “Foiled” series with Jane Yolen and “Decelerate Blue” with Adam Rapp, both published with First Second Books.

Mike is an instructor at the School of Visual Arts in New York City, and is the Vice-Chairman of the Manhattan Chapter of the National Cartoonists Society.