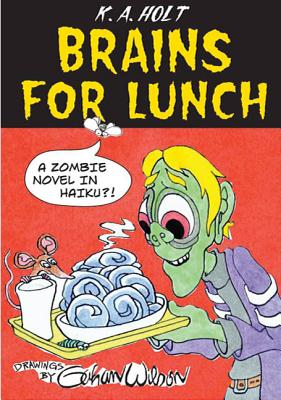 A Zombie Novel in Haiku?!

The difference being that this middle school novel is written entirely in Haiku. Loeb, its zombie protagonist has a problem: the object of his affection, Siobhan, is a lifer (i.e. human). What to do? In scenes set around a lunch table (the menu: brains) and around the school, eyes roll and jaws drop (literally). Also featured in the cast of characters is Carl, a chupacabra (bloodsucking critter) and Mrs. Fincher, a sympathetic and seductive librarian.


Praise For Brains For Lunch: A Zombie Novel in Haiku?!…

“This intriguing book definitely has an audience–one that appreciates, quite literally, tongue-in-cheek humor.” —School Library Journal

“The shuffle-and-stop rhythm of haiku is amusingly appropriate for the zombie narrator, and Holt's use of language is consistently clever and playful.” —SLJ Teen

GAHAN WILSON is an author, cartoonist, and illustrator. His cartoons have appeared in Playboy, The New Yorker, Gourmet, Punch and The National Lampoon. Fifteen individual collections of his work have been published, including Is Nothing Sacred? Playboy's Gahan Wilson, The Man in the Cannibal Pot, and and then we'll get him! Wilson has also written and illustrated a number of children's books, including the adventures of Harry, the Fat Bear Spy. For adults, Wilson has written two mystery novels, Eddy Deco's Last Caper and Everybody's Favorite Duck, and short stories which have appeared in Playboy, Omni, The Magazine of Fantasy & Science Fiction, and numerous anthologies.  Other projects include graphic novels adapting the works of Ambrose Bierce and Edgar Allan Poe, a set of trading cards featuring Wilson's demonic baseball players, and his first animated work, a cartoon short, "Gahan Wilson's Diner," released by 20th-Century Fox.

K.A. Holt is a writer, a terrible cook, and a mother of three (not necessarily in that order). When she’s not busy imagining how she would survive a zombie apocalypse, she’s busy imagining how she will survive the day. Kirkus and Publishers Weekly praised her first book for children, MIKE STELLAR: NERVES OF STEEL, with words like precocious and complex, and savvy and sharp.
Loading...
or support indie stores by buying on