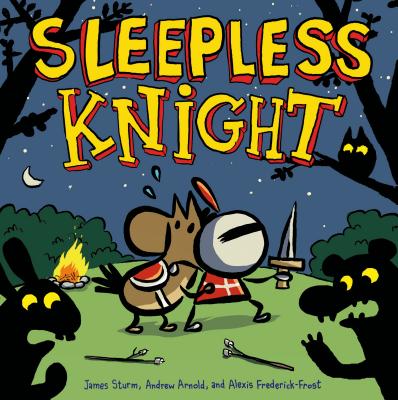 The Knight can't wait for her first camping trip! She and her horse Edward pack everything they need--including her beloved Teddy--and head out into the woods. But when it's time for bed, Teddy is nowhere to be found!

A helpful rabbit thinks this "Teddy" sounds familiar, and sends the Knight off to a cave... but that's no teddy bear in that cave. That's a real bear!

In this sweet, simple adventure, basic comics elements combine with the picture book format to create a picture book for the youngest of comics readers, and a fantastic introduction into the world of Adventures in Cartooning.

“The story bubbles with an inexhaustible energy, never snarky or overreaching, while the endpapers and their directions for drawing the story's characters invite readers to create episodes of their own.” —Publishers Weekly

"Laid out with large, colorful easy-to-follow panels, doodlelike figures engaged in all kinds of appealing slapstick situations, and big, bold speech bubbles, this is a solid introduction to graphic novels for a young audience." —Booklist

"The knight has a pretty remarkable range of emotion for someone wearing a helmet, and the eggplant-shaped Edward is a great straight man (or horse)." —The Horn Book

"The small cast (just four characters) and economy of words make for an engaging and easy flow for beginning readers." —Kirkus Reviews

"This funny tale is sure to be popular with young readers and cartoonists." —School Library Journal

"The crisp, comics-style panels and fairly easy vocabulary make this accessible and appealing to strong primary-grade readers as well as middle-graders." —The Bulletin of the Center for Children's Books

Andrew Arnold is an author-illustrator and cocreator of the award-winning Adventures in Cartooning series from First Second Books. He is also the founder and editorial director of HarperCollins’s graphic novel imprint. He writes and draws from his home in Brooklyn, New York, in the company of his rescue dog, Jerry. What’s the Matter, Marlo? is his debut picture book.
Loading...
or
Not Currently Available for Direct Purchase