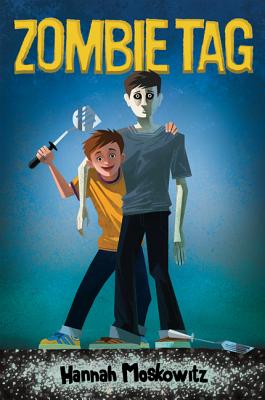 Wil is desperate for his older brother to come back from the dead. But the thing about zombies is . . they don't exactly make the best siblings.

Thirteen-year-old Wil Lowenstein copes with his brother's death by focusing on Zombie Tag, a mafia/
capture the flag hybrid game where he and his friends fight off brain-eating zombies with their mothers' spatulas. What Wil doesn't tell anybody is that if he could bring his dead brother back as a zombie, he would in a heartbeat. But when Wil finds a way to summon all the dead within five miles, he's surprised to discover that his back-from-the-dead brother is emotionless and distant.
In her first novel for younger readers, Moskowitz offers a funny and heartfelt look at how one boy deals with change, loss, and the complicated relationship between brothers.

“Funny and thoughtful, this will appeal to fans of Matthew Cody's Powerless.” —BCCB

“…this unique twist on zombie stories will engage readers who are looking for contemporary fiction sprinkled with a dash of the morbid.” —School Library Journal

“Moskowitz deftly swerves between comedy, pathos, and even terror, and makes it look so effortless readers won't think twice about the strangeness of the mix.” —Booklist

Hannah Moskowitz is the author of Invincible and Break, an ALA popular paperback for Young Adults. Of her first middle grade novel, Zombie Tag, Booklist has said, "Moskowitz deftly swerves between comedy, pathos, and even terror, and makes it look so effortless readers won't think twice about the strangeness of the mix."
Loading...
or support indie stores by buying on