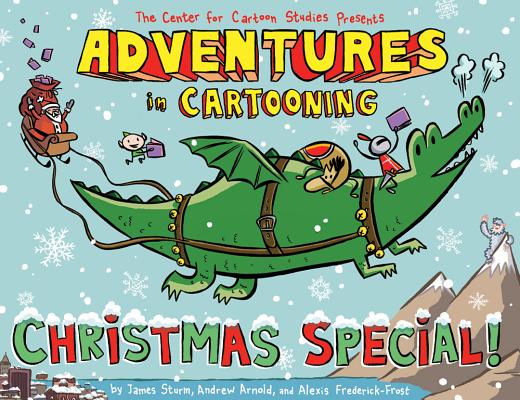 Christmas is coming! The Magic Cartooning Elf and his friend the Knight help Santa make a Christmas comic. But will kids put away their iPads, smart phones, and video games long enough to read a book?

The latest in the beloved Adventures In Cartooning series, Adventures in Cartooning: Christmas Special will inspire children to pick up a pencil and draw up a snow storm! No charger or batteries are needed for this terrific holiday gift.

“Not quite a how-to book, as the cover might suggest, this is rather a stupendous new high for children's graphic novels, spearheaded by comics maestro Sturm (Satchel Paige: Striking Out Jim Crow, 2007). Ostensibly, this is the adventure of an eager knight, a sweet-toothed horse, and a magic elf hunting down a gum-chewing dragon, and those reading for the adventure itself will not be disappointed, filled as it is with humor, action, and a great girl-empowering twist. But along the way, lessons in the language of sequential art are woven seamlessly into the narrative, explaining the basics of how elements such as panels and word balloons work, while concluding bonus features offer specifics on terminology (like gutters and stems) and common symbols (like speed lines). Newcomers Andrew Arnold and Alexis Frederick-Frost, using varying page compositions to keep the sizable volume visually captivating, have constructed a tale that works just as well as a read-aloud for the very young as it does a lesson for everyone from fans of the form to the wholly uninitiated. As an examination of the medium, it's a supremely worthy spiritual legacy to Scott McCloud's seminal Understanding Comics (1993). As a straight-up graphic adventure, it may be the best of the year.” —Booklist, starred review

“Gr 2-6-The young princess, thought to be ensconced in a tower, is missing. A "BRAVE and EAGER knight" and his less-than-fearless horse Edward learn that she has been abducted by a dragon and remains captive on Dragon Island. Assisted by the Magic Cartooning Elf, the knight goes in search of her. In this story within a story, the princess learns how to create her own cartoon. Basic principles of creating comics are taught by context, inference, and direct instruction. The humor, action, adventure, and charming characters hold readers' attention and draw them into a fantasy world of a candy-consuming dragon and knights who have been turned into vegetables. Readers learn about the uses of panels, the importance of words, and placement of thought balloons. Each tutorial panel contains clever and inventive touches that illustrate the capabilities of the format. The progression of the pink gum bubble on the first four pages is a classic. At the conclusion of this delightful tale, cartooning basics such as panels, gutters, tiers, word balloons, depiction of emotion, and movement are explained in an organized and straightforward fashion. This is a volume for kids who love comics, who enjoy an adventure filled with action and humor, are natural-born artists, or who aspire to become comic-book creators. A surefire hit.” —Barbara M. Moon, Suffolk Cooperative Library System, Bellport, NY, School Library Journal

James Sturm is the author of several award-winning graphic novels for children and adults, including James Sturm’s America, Market Day, The Golem’s Mighty Swing and Satchel Paige: Striking Out Jim Crow. He is also the founder of the Center for Cartoon Studies and the National Association for Comics Art Educators.  He created Adventures in Cartooning with collaborators Alexis Frederic-Frost and Andrew Arnold. Sturm, his wife, and two daughters live in White River Junction, Vermont.
Loading...
or
Not Currently Available for Direct Purchase