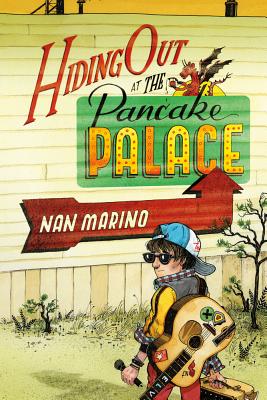 Hiding Out at the Pancake Palace

In Hiding Out at the Pancake Palace by Nan Marino, eleven-year-old musical prodigy, Elvis Ruby, was supposed to win the most coveted reality show on television, Tween Star. None of the other contestants even came close to his talents. But in the middle of the biggest night, with millions of people watching, Elvis panicked. He forgot the words to the song. He forgot the tune. He forgot how to play every single instrument he'd ever known and froze on national TV. So Elvis must run from the paparazzi camped outside his door and spend the summer working with his aunt and cousin at Piney Pete's Pancake Palace in the remote wilds of New Jersey. It's the perfect place to be anonymous, that is until Elvis meets Cecilia, a girl who can't seem to help blurting out whatever's on her mind.


Praise For Hiding Out at the Pancake Palace…

“*Put this book in the hands of both the girls who follow every moment of the latest teen celebrity's life and the quiet boys and girls who stand on the sidelines, listening for their song.” —School Library Journal, starred review

“*Her audience will eat it up.” —Kirkus Reviews, starred review

“Wish-fulfillment appeal for many a young reader.” —BCCB

Nan Marino is the author of Neil Armstrong Is My Uncle & Other Lies Muscle Man McGinty Told Me, which received a SCBWI Golden Kite Honor and was featured on the Bank Street Best Books and the New York Public Library 100 Titles for Reading and Sharing.  Nan is also a librarian who lives with her husband and a large dog in a town that borders the Pinelands of New Jersey.
Loading...
or
Not Currently Available for Direct Purchase