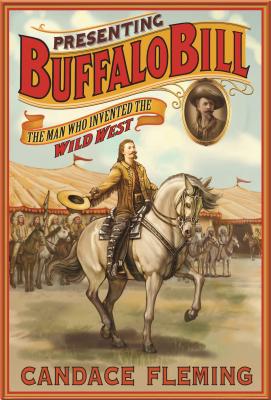 The Man Who Invented the Wild West

Everyone knows the name Buffalo Bill, but few these days know what he did or, in some cases, didn't do. Was he a Pony Express rider? Did he serve Custer at the Battle of Little Big Horn? Did he scalp countless Native Americans, or did he defend their rights?

This, the first significant biography of Buffalo Bill Cody for younger readers in many years, explains it all. With copious archival illustrations and a handsome design, Presenting Buffalo Bill makes the great showman come alive for new generations. Extensive back matter, bibliography, and source notes complete the package.


Praise For Presenting Buffalo Bill: The Man Who Invented the Wild West…

"Fans of Fleming’s The Family Romanov (BCCB 9/14) may marvel at the abrupt bounce from Russian Revolution to Wild West, but those who appreciate her authorial craftsmanship will recognize that she makes each of these great stories a window into countless others."—Bulletin of the Center for Children's Books, starred review

"Fleming begins each chapter with a scene fromthe “Wild West” show, using the theatrical production to introduce a time periodin Cody’s life, which, unadorned, is still fascinating as this man with a hardscrabble
childhood makes and loses several fortunes over his lifetime."—The Horn Book, starred review

"A thoroughly engaging portrait of a fascinating, larger-than-life figure."—Kirkus Reviews

"An illuminating look at an American legend."—Booklist

Candace Fleming is the author of Giant Squid, an ALA Notable Book and Charlotte Zolotow Honor Book, and numerous other books for children. She lives in Oak Park, Illinois.

I have always been a storyteller. Even before I could write my name, I could tell a good tale. And I told them all the time. As a preschooler, I told my neighbors all about my three-legged cat named Spot. In kindergarten, I told my classmates about the ghost that lived in my attic. And in first grade, I told my teacher, Miss Harbart, all about my family’s trip to Paris, France.

I told such a good story that people always thought I was telling the truth. But I wasn’t. I didn’t have a three-legged cat or a ghost in my attic, and I’d certainly never been to Paris, France. I simply enjoyed telling a good story . . . and seeing my listener’s reaction.

Sure, some people might have said I was a seven-year-old fibber. But not my parents. Instead of calling my stories "fibs" they called them "imaginative." They encouraged me to put my stories down on paper. I did. And amazingly, once I began writing, I couldn’t stop. I filled notebook after notebook with stories, poems, plays. I still have many of those notebooks. They’re precious to me because they are a record of my writing life from elementary school on.

In second grade, I discovered a passion for language. I can still remember the day my teacher, Ms. Johnson, held up a horn-shaped basket filled with papier-mâché pumpkins and asked the class to repeat the word "cornucopia." I said it again and again. I tasted the word on my lips. I tested it on my ears. That afternoon, I skipped all the way home from school chanting "Cornucopia! Cornucopia!" From then on, I really began listening to words -- to the sounds they made, and the way they were used, and how they made me feel. I longed to put them together in ways that were beautiful and yet told a story.

As I grew, I continued to write stories. But I never really thought of becoming an author. Instead, I went to college, where I discovered yet another passion -- history. I didn’t realize it then, but studying history was really just an extension of my love of stories. After all, some of the best stories are true ones -- tales of heroism and villainy made more incredible by the fact they really happened.

After graduation, I got married and had children. I read to them a lot, and that’s when I discovered the joy and music of children’s books. I simply couldn’t get enough of them. With my two sons in tow, I made endless trips to the library. I read stacks of books. I found myself begging, "Just one more, pleeeease!" while my boys begged for lights-out and sleep. Then it struck me. Why not write children’s books? It seemed the perfect way to combine all the things I loved -- stories, musical language, history, and reading. I couldn’t wait to get started.

But writing children’s books is harder than it sounds. For three years, I wrote story after story. I sent them to publisher after publisher. And I received rejection letter after rejection letter. Still, I didn’t give up. I kept trying until finally one of my stories was pulled from the slush pile and turned into a book. My career as a children’s author had begun.