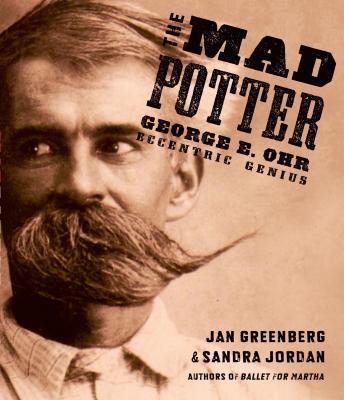 When George Ohr's trove of pottery was discovered in 1967, years after his death, his true genius was discovered with it. The world could finally see how unique this artist really was!

Born in 1856 in Biloxi, Mississippi, George grew up to the sounds of the civil war and political unrest. When he was 22, his boyhood friend introduced him to the pottery wheel. The lost young man suddenly found his calling.

"When I found the potter's wheel I felt it all over like a duck in water."

He started creating strangely crafted pots and vases, expressing his creativity and personality through the ceramic sculptures. Eventually he had thousands at his fingertips. He took them to fairs and art shows, but nobody was buying these odd figures from this bizarre man. Eventually he retired, but not without hiding hundreds of his ceramics.

Jan Greenberg and Sandra Jordan, authors of the award winning Ballet for Martha, approach this colorful biography with a gentle and curious hand.

“Eccentricity may sometimes be a taxing quality in real life, but on the page it is an easy source of delight. The flamboyant 19th-century Mississippi artisan George E. Ohr took pride in his peculiarity, calling himself a "rankey krankey solid individualist." Born several years before the Civil War, the man who would become posthumously famous for creating dazzlingly imaginative vases, bowls and teapots worked in an atmosphere of deprecation in his own era. Ohr's bittersweet story leaps from the nonfiction pages of Jan Greenberg and Sandra Jordan's "The Mad Potter: George E. Ohr, Eccentric Genius" (Roaring Brook, 56 pages, $17.99).

We meet George as a boy, the black sheep of his family in the Gulf Coast town of Biloxi. At 22, however, he discovered his vocation: "When I found the potter's wheel I felt it all over like a duck in water," he wrote later. Soon Ohr was turning out bizarre and wonderful wares: ruffled vases, undulating pitchers and curious shining pots that seem to wave or twirl in the light. Despite George's showmanship-he bragged prodigiously and wore his mustaches curled around his ears-neither he nor his work was much valued until 50 years after his death. This appealing account is full of strangely endearing photographs, including one of the mad potter tucking his fists behind his crossed arms to show off his biceps.” —The Wall Street Journal

“...will certainly prod them to ask themselves if they're really living life to the fullest.” —Publishers Weekly

“* The authors do an excellent job describing this larger-than-life character through quotes and plentiful color photos of his pottery, or "mud babies" as he referred to his creations. Of particular interest are the archival sepia photos, including the two large, double-page images depicting the artist in his barnlike studio with piles and piles of his work-and several children-about, that open and close the book.” —School Library Journal, starred review

“A fascinating introduction to an innovative artist.” —Kirkus Reviews