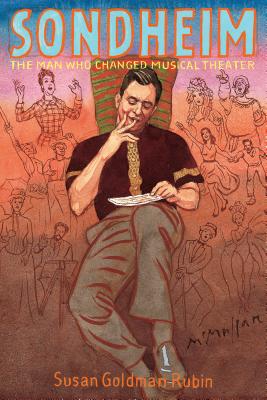 In high school, Stephen Sondheim put a script in front of his friend and mentor Oscar Hammerstein. "I want you to treat this as if it were a script that just came across your desk," Sondheim told the older man.

"In that case, it's the worst thing I ever read."

So Stephen Sondheim kept writing. He kept composing and in time he became the greatest composer Broadway had ever seen.

Beginning with the opening night of the classic musical West Side Story in 1957, and tracing Stephen's life from boyhood to his struggles as an up and coming Broadway composer/lyricist to a musical theater legend, Susan Rubin's Putting It Together draws readers into the passionate, tumultuous, and musical world of Stephen Sondheim.

Susan Goldman Rubin grew up in the Bronx and became an avid theatergoer from the time she was taken to see her first Broadway show. Rubin is the author of more than fifty books for young people, many of them on the arts. Her titles include Music Was It! Young Leonard Bernstein (American Library Association Notable Childrens Book, Sydney Taylor Book Award winner, and YALSA finalist), and Everybody Paints! The Lives and Art of the Wyeth Family (Booklist Top 10 Biographies for Youth). She lives in Malibu, California.
Loading...
or
Not Currently Available for Direct Purchase