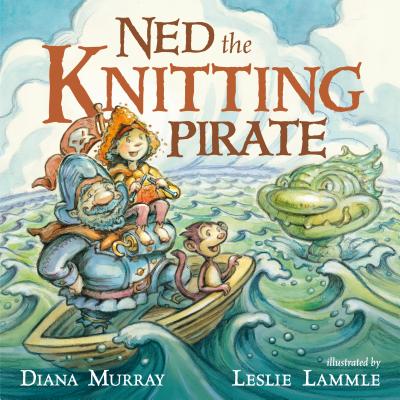 The crew of the pirate ship the Rusty Heap are a fearsome bunch! They're tougher than gristle and barnacle grit. They heave and they ho and they swab and they . . . knit?

Well, one of them does, at least! Unfortunately for Ned, his knitting doesn't go over well with the captain and crew. They urge him to hide his hobby and strive to be scurvier, like pirates should be. But when the briny ocean beast shows up to feast on the Rusty Heap and its crew, maybe Ned's knitting is just the ticket to save the day!

From author Diana Murray and illustrator Leslie Lammle comes the delightfully salty tale of Ned the Knitting Pirate, a boy whose love for yarn and appliqué just doesn't quite let him fit in, but makes him stand out in the best way, instead. With their appealing angle on individuality, Murray's hilarious characters and Lammle's bright illustrations are sure to win over even the most reluctant landlubber.


Praise For Ned the Knitting Pirate…

"Not every traditional childhood play scenario stands the test of time, but this delightful book shows the awesome flexibility of pirates."–The New York TImes Book Review

"Murray (City Shapes) crafts her rhymes as conscientiously as Ned works on his knitting... Ned’s stout commitment to knitting and his poise in the face of derision make him a thoroughly lovable hero." –Publishers Weekly

"A rollicking and rhyming adventure... perfect for reading aloud."–Kirkus Reviews

Leslie Lammle is a Canadian born picture book author and illustrator. Her illustrations have appeared in The New York Times, The Wall Street Journal, and various magazines. Leslie works out of her kitchen, surrounded by drawings of potential new characters for new books, and is always testing out stories on neighborhood kids
Loading...
or
Not Currently Available for Direct Purchase