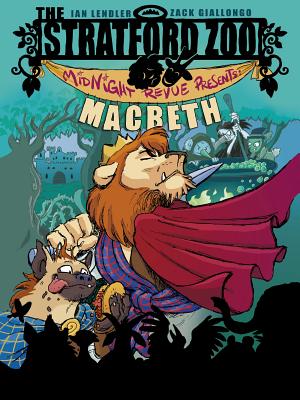 The Stratford Zoo looks like a normal zoo... until the gates shut at night. That's when the animals come out of their cages to stage elaborate performances of Shakespeare's greatest works. They might not be the most accomplished thespians, but they've got what counts: heart. Also fangs, feathers, scales, and tails, in The Stratford Zoo Midnight Revue Presents Macbeth.

Ian Lendler's hilarious tale of after-hours animal stagecraft is perfectly paired with the adorable, accessible artwork of Zack Giallongo (Broxo, Ewoks). And with Romeo and Juliet coming in book two, this is a promising new series of graphic novels for young readers.

“. . . a wonderfully accessible, engaging, and kid-friendly adaptation of the Shakespeare classic.” —Booklist

“. . . a comic affair that will appeal to younger readers.” —School Library Journal

“*As the zookeeper locks the gates to the Stratford Zoo, the animals are just beginning to set up for their evening performance of Macbeth . . . Those too young to appreciate the original play will certainly grasp this cleverly anthropomorphized, lushly envisioned graphic romp.” —Kirkus Reviews, STARRED REVIEW